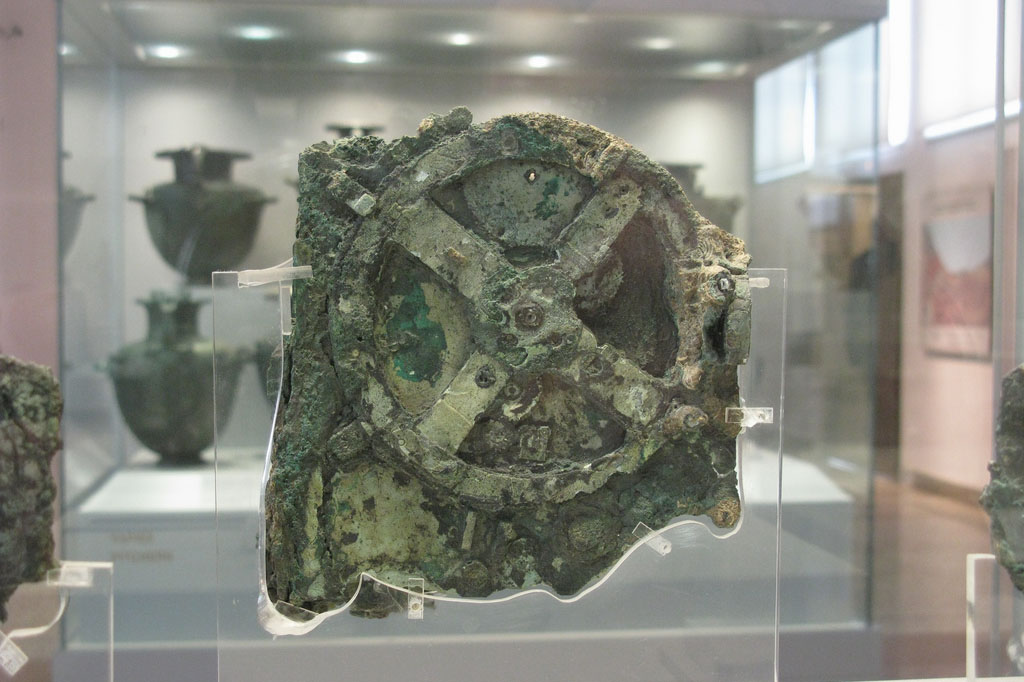 Secrets of the Antikythera Mechanism | The 2,000 Year Old Analog Computer

Secrets of the Antikythera Mechanism | The 2,000 Year Old Analog Computer

The Antikythera Mechanism is an ancient Greek device thought to be, at 2,100 years old, the first analog computer ever created. It is believed that the mechanism was able to indicate the position of the sun and moon, lunar phases, and eclipses - all for decades into the future.

Origins and Discovery of the Mechanism

Recovery of the Antikythera Wreck

The mechanism was created sometime between 205 BC and 87 BC, depending on who you ask, and was lost to the sea in approximately 70-60 BC, when a Roman ship traveling between Asia Minor and Italy was wrecked just off the coast of Antikythera, a small island in the Aegean Sea right between Crete and Peloponnese.

The Antikythera Wreck, as it is known, as discovered by fishermen divers in 1900, who saw the bronze hand of a statue on the seafloor. Aside from the mechanism, the wreck contained a huge wealth of treasures. The Greek authorities searched the wreck thoroughly in 1901, finding over 200 amphori (tall Greek jars, such as those seen in Disney’s Hercules), vases, oil lamps, and more unique items, including many works of art. 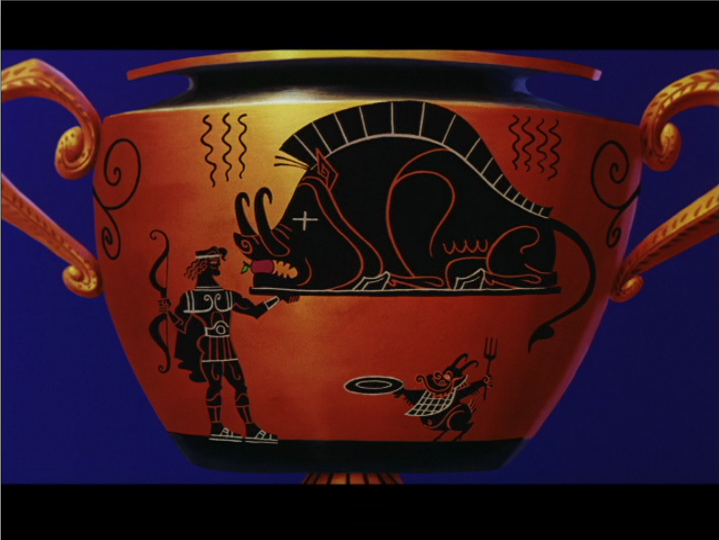 Example of an amphora

For example, the bronze hand initially found belonged to a 5th century BC statue of a philosopher. 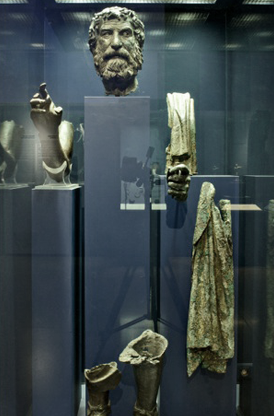 Another major work recovered was the Antikythera Ephebe (or Youth). 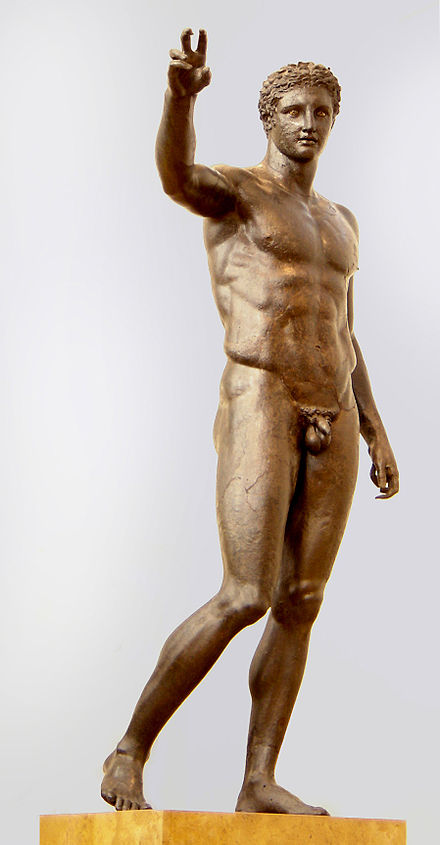 The divers also found parts of the Antikythera Mechanism, which were heavily corroded and appeared mainly as a nondescript bronze lump. The pieces began to disintegrate when it was removed from the water but were moved to the National Archaeological Museum in Athens for storage and preservation, along with the other recovered items.

The mechanism pieces were largely ignored at first, as museum staff focused on rebuilding the statues recovered from the wreck.

On May 17th, 1902, an archaeologist named Valerios Stais found that one of the pieces contained a gear wheel, and hypothesized that is was part of an astronomical clock. However, most other researchers didn’t believe that a device of such complexity could have existed at the time of the wreck, and nothing more came of it immediately. 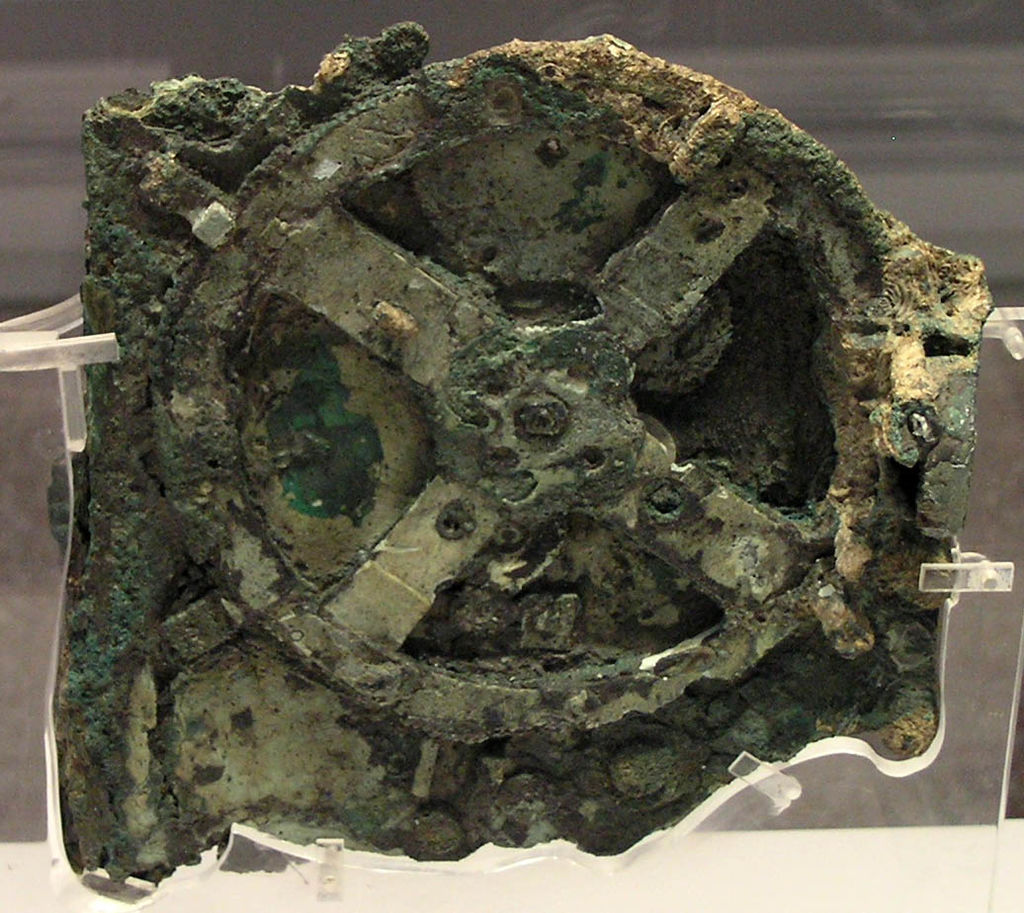 Over time, the recovered mechanism broke into three major pieces due to degradation and handling by the museum staff. Other small pieces broke off or were otherwise discovered in a 1976 dive by Jacques Cousteau, totaling 82 known pieces of the mechanism.

In 1951, a science historian and Yale professor named Derek J. de Solla Price became interested in the artifact and continued to research it. In 1971, Price worked with a nuclear physicist named Charalampos Karakalos to make X-ray and gamma-ray images of the 82 recovered fragments of the mechanism. Price then published a 70-page report of their findings in 1974. 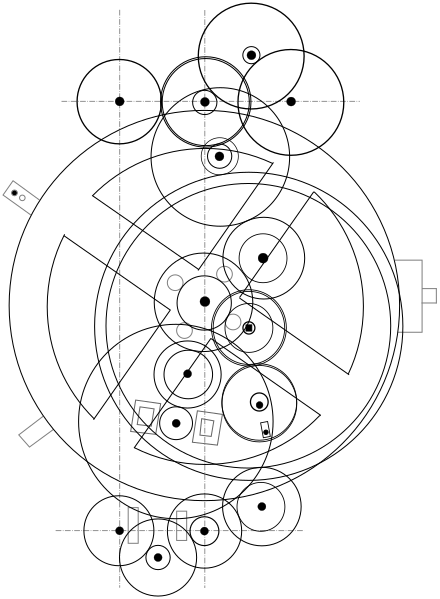 A schematic of the device's inner mechanics.

In the 21st century, researchers were able to use more sophisticated scanning tools to bypass the corrosion and access a fully 3D view of the machine’s pieces and inner workings. Inscriptions were found on the machine, which appeared to be instructions for its use. By comparing this information to the number of teeth on the gears and the known astrological cycles at the time of the machine’s creation, scientists were able to make a reliable reconstitution of the Antikythera Mechanism.

How Did the Antikythera Mechanism Work?

The mechanism appears to have been housed in a 20-centimeter-tall rectangular box with dials on the front and back, and a small rotating handle on the side. 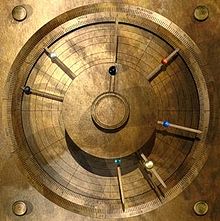 A rendering of the dial on the mechanism's front face.

The Face of the Mechanism

The front face has one large dial. The outer ring of the dial denotes the 365-day Egyptian solar calendar, while a smaller inner circle shows the twelve signs of the zodiac. The center of the dials features two rotating hands, similar in a way to those of a clock. One hand indicates the exact position of the sun, and the other the position of the moon. A small sphere at the end of the moon hand is half one color and half another. This sphere rotates with the hands, in order to simulate the phases of the moon.

Simulation of how the hands would move with the turn of the handle.

The small handle on the side of the device’s rectangular frame could be turned in order to rotate these hands and view the position of the sun and moon, as well as lunar phases, for any day of the year.

The back of the rectangular box has five more dials, including two large ones. The first large dial, the Metonic, indicates the Metonic cycle, a period of 19 years (or 235 lunar months), at the end of which the new and full moons return to the same days of the year. The Metonic cycle was used as the basis of the ancient Greek calendar and in this case, was used to guarantee that the dial on the front of the mechanism was correctly indicating the state of the lunar and solar years. 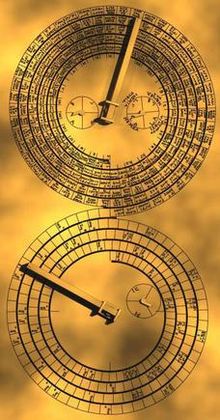 A rendering of the mechanism's back face.

There are two smaller dials inlaid in the Metonic dial. The first is the Callippic dial. A Callippic cycle follows a 76-year cycle (four Metonic cycles) and this dial was used to keep track of which Metonic cycle it was on.

The second of the small dials within the Metonic dial is the Games (renamed from Olympiad) dial, which notably moves counter-clockwise, unlike every other dial on the mechanism. This dial was used to indicate the timing of six different athletic games, including the Ancient Olympic Games.

The second large dial on the back face was the Saros dial, which indicated the 223-month astronomical cycle of the same name which was used to predict eclipses of the sun and moon.

Finally, a third small dial was inlaid within the Saros dial. This was the Exeligmos Dial and represented a 54-year triple Saros cycle. This dial indicated how many hours must be added to the times of the Saros dial to get exact calculations of the eclipse times.

For anyone who has seen Avatar: The Last Airbender, the application of this device may sound familiar. 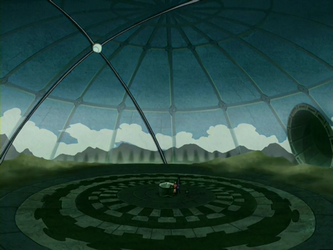 The interior of the device featured a complex layout of at least 30 interworking gears, and there have been several proposed schemes as to how exactly these were laid out. This section of the Wikipedia article has much more information on the different gears and possible schematics.

Below is one hypothetical schematic that may have been used in the Antikythera Mechanism. 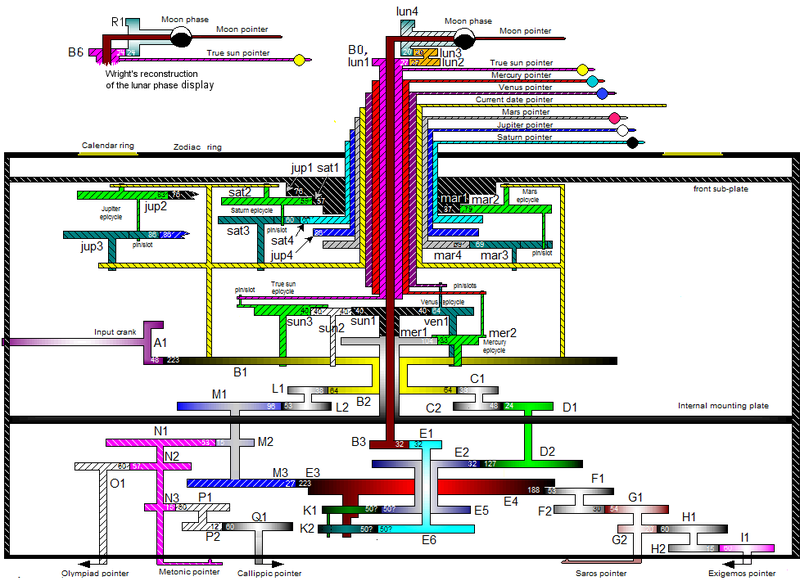 As the world’s first known computer, the Antikythera Mechanism has a lot to teach us about the ingenuity of ancient Greece. It is very likely that researchers will uncover further revelations about the mechanism and how it worked as time goes on.

Below are some of the sources used for this article, which are highly recommended reading for those who want to learn more about the Antikythera Mechanism.