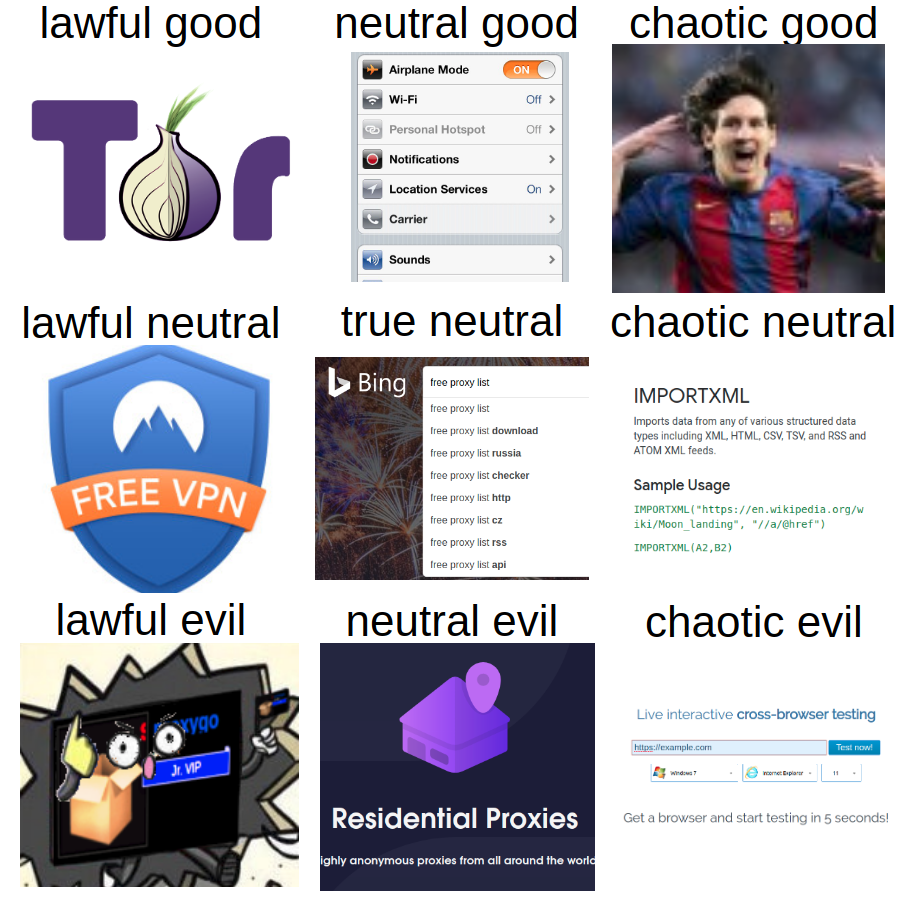 What kind of proxies do you need to hack into the CIA? Or to spam advertisements for cheap toasters on NiceSocialMediaWebsite.net?

I don’t know who created Proxy-Go, but I’m trying to figure out how we get them to have Proxy-Go-To-The-Polls.

What kind of proxies do you need to hack into the CIA? Or to spam advertisements for cheap toasters on NiceSocialMediaWebsite.net?

I don’t know who created Proxy-Go, but I’m trying to figure out how we get them to have Proxy-Go-To-The-Polls.

It’s time to find out, if you read this article.

The Onion Router (Tor) and the Tor Browser

If you are a 1337 hax0r trying to figure out what kind of proxies to use, you should probably stop reading this article and install the Tor browser, which provides provides access to proxies via the onion network.

Despite the fact that complete lists of all of the Tor exit nodes are listed publicly, few websites use explicitly these lists for the purposes of spam filtering. Most websites—including major websites such as Reddit and Facebook—allow users to browse their sites via Tor.

Since I’m not a shill for NiceVPNAffiliateProgram, just read this thread:

In terms of hacking the government and shilling for the Best Online Casinos Near Me, VPNs are mostly useful only hypothetically. In general, most of their functionality can be done comparably well or better by Tor.

However, they are often:

VPNs seem to be less popular as proxies for spamming the Internet, for the reasons listed above.

Edit 21 April, 2019: We are a shill for Private Internet Access, though, now that the UK and New Zealand have become offbrand China. They're lisetd on our affiliat deals page.

Then Who Was Phone?

Humans who have cell phones with access to mobile data—which is basically everyone—secretly have access to the ability to easily change their IP address—on any device; not just the phone—by using their phone as a mobile hotspot. Because the proxies available through this method are very high quality, this technique has gained some popularity for the purposes of webspam, despite being limited in scale

So ur wid yo honi and ur makin out wen the phone ringz. U ansr it n da voice sayz “wut r u doin wit ma daughter?”u tel ur girl n she say “ma dad is ded.” THEN WHO WAS PHONE?

If you look for free proxies in one of the various search engines that exist, you will generally find a bunch of free public proxies:

These proxies are generally used for things like ScrapeBox, where a user may want to be anonymous and to make requests from many different IP addresses, but where high quality, fast, and/or private proxies are not needed.

More information on Scrapebox is available in this thread:

People who need to acquire proxies to hack the government are generally looking for proxy options that meet some or all of these considerations:

Proxies that are bought and sold for the purpose of being used for web spam are generally sold in a way where users can select both the type of proxies that are needed as well as the distribution model.

Because proxies listed in data centers can easily be identified as proxies, it is common for proxy services to offer “residential proxies” for users who are attempting to circumvent spam filters.

That these proxies are, generally, hacked or otherwise of questionable origin.

Those two categories of proxy (data center and residential) are both generally available in three different distribution arrangements.

Static proxies are arrangements where specific IP addresses are reserved for a user, generally on a monthly basis. These proxies are generally the most expensive, since the individual selling the proxies is unable to use them as part of a rotating pool.

The primary reason why users may require access to the same static proxies is that some websites that are commonly the target of webspam may trigger anti-spam actions—such as requiring user re-verification (such as clicking a link in a confirmation email)—if the user logs in from a new IP address.

Shared proxies are the same as static proxies in that users continuously have access to the same unchanging IP addresses. The difference being that multiple users (generally anywhere from 2-5 other users) will be given access to the same static IP addresses. These proxies are generally roughly half the cost of static proxies at the expense of potential reductions in speed and a chance that other users may be using the proxies in a way that will get them blacklisted from certain websites.

With rotating proxy pools, users are given static access IP addresses that—when connected to--automatically route the user’s traffic out to a second proxy. Through this setup, the user connects to one entry point and the proxy provider will automatically change the outward-facing proxy either after a specific timeframe (3-15 minutes, generally) or on each HTTP request.

These proxy pools will generally contain anywhere from 10,000 to 100,000 proxies; in some cases, the best 1 to 10 percent of the proxies in these pools may be used for a disproportionate amount of the traffic. These proxies are generally the cheapest, since tens, hundreds, or thousands of users may be sharing the same pool of proxies.

Shills for the Best Natural Steroids Online Legit Free are generally using some proxies similar to what are mentioned in this article.

If you run a website and want your spam filter to work correctly, you should probably take this information into account. Or don’t; I’m not your dad.