The simplest way to do organic keyword research for (almost) free

Have you ever wondered how the pros do keyword research? This article will teach you how to find every organic keyword that exists.

The simplest way to do organic keyword research for (almost) free

Have you ever wondered how the pros do keyword research? This article will teach you how to find every organic keyword that exists.

I decided to put this article together so that anyone who’s struggling where to start with niche and keyword research can now have a solid, proven methods to go back to.

Hopefully this will help cut through all the unnecessary crap you can read on the Internet these days and people coming up with weird metrics that do nothing but make you overthink what may or may not be a valid thing to consider in the first place.

Take the “Keyword Golden Ratio” for example, if you’ve heard of it. While this is an interesting concept, whether or not that’s a valuable metric to use in the first place isn’t what many people who actually start to use it even consider. Because, let’s face it – all this is is just a made up number by someone who may or may be trustworthy, with or without an agenda (and it’s usually the first one).

Keyword research tools and why most of them suck

You may also happen to use KWFinder or KeySearch and take their word for anything and everything. Well, here’s what the KWFinder difficulty says when you put in “if fiat multupla is the ugliest car ever then who built the pyramids” 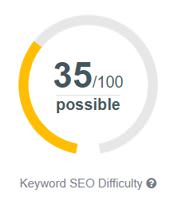 So, even though this is a phrase that probably no one in history ever wrote, KWFinder puts it in the “possible” range, which can include some fairly difficult keywords, such as “how old is the queen”, which is actually right there:

This isn’t the first time KWFinder has had an imperfect formula. When Moz updated their link graph, KWFinder’s justification for showing super easy keywords in the 40s difficulty range was “well, our formula is now even more accurate!”. In reality, they took half a year to update their difficulty formula to match the new Moz data, and they actually adjusted their formula just so people can see enough “green keywords” and keep using their tool. This is because, among other things, KWFinder doesn’t even put relevancy into the equation. They just use third party metrics, and you’d have to trust both them and the third party that they know what they’re doing and that their data is valid in any sort of way. Bit of a long shot, really. They don’t know how to consider relevancy, and I’m not even sure if they actually do SEO in order to have any sort of educated opinion on this. They just sell a nicely looking tool, is all.

Don’t even get me started on the monthly searches. There isn’t a single tool providing 100% accurate information on that. Ahrefs gets pretty close, but considering Google has been restricting AdWords (now Google Ads) API access for years, even theirs is sometimes way off. One of my affiliate sites is currently getting 30 hits per day from a keyword that Ahrefs says has an average search volume of 30 per month.

So, in a world with so much information being shoved down your throat, how do you actually start doing keyword research?

Think you found that one magical keyword? You didn’t. If any one keyword has any significant amount of monthly searches, then at least some of your competition knows about it – no exceptions. Looking for that one magical keyword is a fool’s errand because their isn’t just ONE keyword. Good SEO consists of doing things right most of the time, consistently. No one-off lucky keyword find will help you do that.

Instead, focus on finding AS MANY decent volume, LOWER competition keywords as possible. Contrary to popular belief, some competition in keyword research isn’t all that bad. If you have none, what are you even selling? Because if there’s no competition than it’s very likely that nobody is even searching for your thing in the first place. Supply and demand, is all.

Anyway, let’s get on with the actual process of finding good keywords.

If you were about to open up the Google Keyword Planner, just stop right now. Believe it or not, that is NOT an SEO tool. It was made to help Google get people to spend more money on ads. That’s about it. Also, in case you didn’t know, their “competition” column doesn’t tell you anything about the actual SEO competition of the keyword. And come on, do you really think Google would give you the keyword ideas they don’t have people buying ads for so that you can use them to rank for organically? Think again.

What I like to do, is mainly rely on Ahrefs for this. Write down some of your main keywords, and then plug them into the Ahrefs Keywords Explorer.

Then, look through the “Also Rank For” and “Having Same Terms” sections

You’re guaranteed to find a ton of good keywords that you can use. Ahrefs’ Keyword Difficulty score, while more reliable than KWFinder, is actually very skewed. It’s as if on one side you everything with a KD from 0 to 10, and on the other side everything else. Even keywords I consider harder will sometimes have an Ahrefs Keyword Difficulty of 5 or so, so don’t rely on it too much.

Their formula pretty much solely relies on links though, and considering they do still have a better link graph than Moz, you won’t have much mumbo jumbo pseudo-SEO-science involved here as with KWFinder.

Pick through these, and try to combine them in articles as much as you can. No magic keywords, remember? You’re probably wasting the article if you’re just targeting a single keyword with it anyway.

This is a big one. Go on Flippa and see which sites in your niche got sold in the past few months. Then import them in the Ahrefs Site Explorer, and export their organic keywords.

This one is a bit evil. Google the following:

Go through the sites that show up and find some smaller ones. Than, paste each into the Ahrefs Site Explorer (or the Batch Analysis if you prefer that) and see which keywords they’re ranking on positions 1 to 20 for.

If this is truly a smaller irrelevant site and you didn’t mess up, you should be able to steal their ranks quite easily, especially if the domain you’re trying to rank with has a decent backlink profile.

4. Getting other relevant keywords to target

Put every keyword that you want to target into KeywordShitter and wait until you get about 250 results. Then plug those into the Ahrefs Keywords Explorer, and see everything that you can use that has decent search volume

That’s all there is to it! Think there was something more that you need to do? Absolutely not. First of all, you’re getting most of the keywords that your competitors are ranking for by using the Ahrefs Keyword Explorer. Second, you’re using KeywordShitter which is real queries people search for. If something was ever searched, THESE are the ways to find it. Just pick what you think can make a good return and then start doing actual SEO instead of sitting around waiting for the magical keyword to pop up. Instead of outsourcing keyword research and hoping someone else will care about your business more than you do, learn to do it yourself.

This is coming from someone who’s had a few hundred keyword research clients, too. It’s a daily occurrence for me to see someone expecting the world by using my service. “I want a 10,000 US monthly searches keyword that’s low competition” – are you serious? Yeah, because 10k US MS searches keywords are just sitting there unused waiting for me to find them for your special secret niche (which everyone thinks theirs is). Not gonna happen.

Re: Point #4: Keyword Shitter is probably one of the best free KW research tools on the planet.