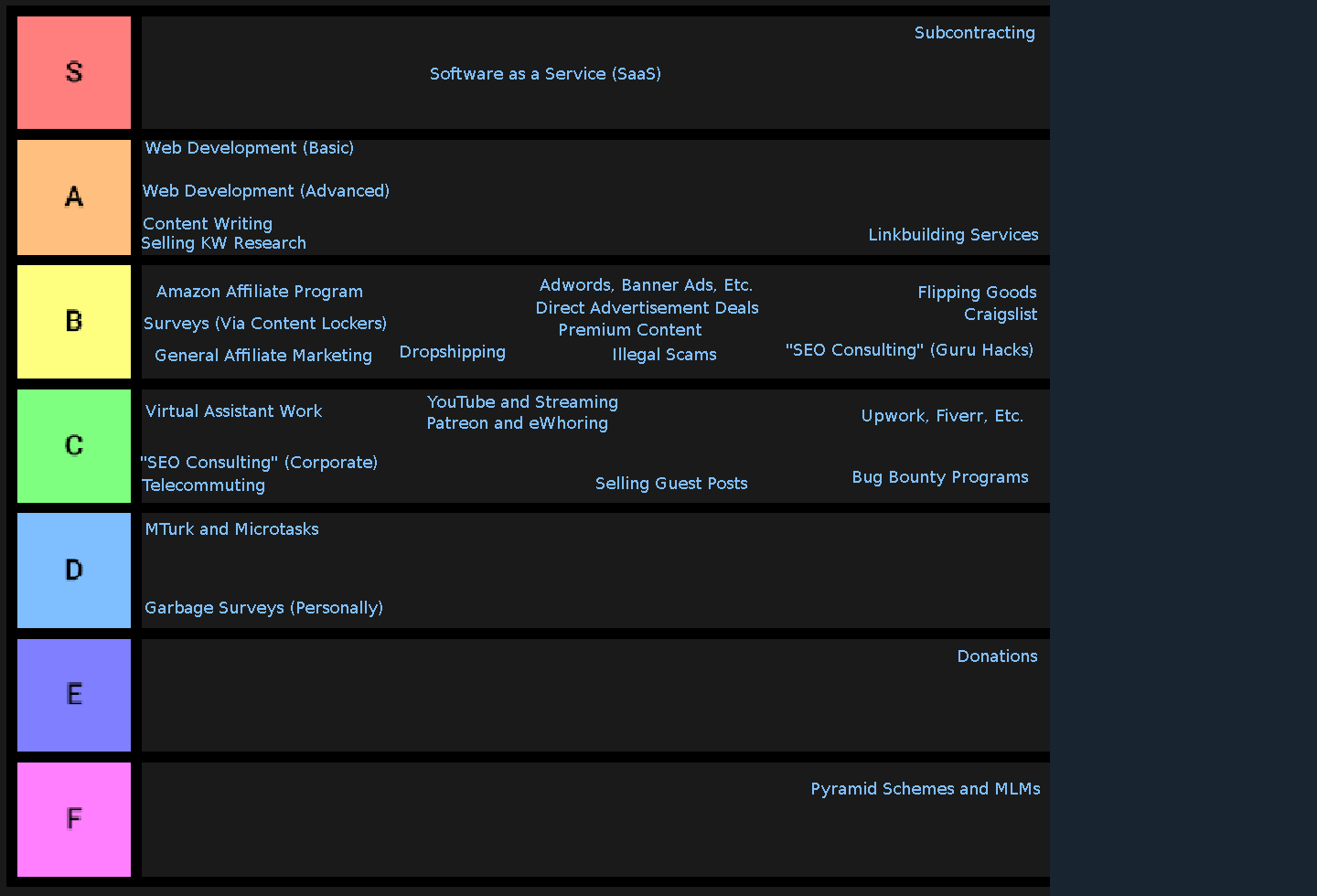 Leave the kind of gun you'd use to rob a liquor store in the comments.

Leave the kind of gun you'd use to rob a liquor store in the comments.

What it be, what it do? It's your boy Offbrand iDubbbz here with another quality tier list.

A summary of the final tier list as discussed in the video above is included below.

Fairly self explanatory method with a fairly low barrier to entry. Get contract-based work, such as the concepts discussed in A-Tier, and then subcontract out to other parties and take a percent as profit. Fairly straightforward and can be highly profitable. Various considerations, limitations, and concepts discussed in the full video above.

Software as a Service (SaaS)

As far as methods to make money online go, running a SaaS has very high potential for scaling. However, there are limitations related to both:

However, once a successful SaaS is built, they have low maintenence, high recurring income, and high potential to be scaled.

A-Tier contains primarily contract based work, much of which can also be subcontracted as described under the S-Tier section on subcontracting. These are generally fairly easy to get into and can also be both profitable and scalable, through the use of subcontracting.

Basic web development could even be bumpted up to S-tier. Selling basic/standard small-business/similar sites for a flat rate (generally $1,000 to $3,000) has very high potential for generating a high hourly wage. The nature of computer/programming type work means that there is also large potentiall for much of this process to be automated, allowing you to clear $100+ per hour fairly easily, once you have experience and ideally a decent setup for workflow optimization.

You would think that the pay would be better than basic web development, but due to the higher potential to optimize the workflow for basic web development, more advanced projects seem to have a worse ROI (when working for clients). Building advanced sites for yourself is an obvious exception, if you're building a business that requires some type of advanced functionality.

Extremely low barrier to entry and far less saturated than many expect, who are new to making money on the Internet. Note that there is a substantial difference in quality between writers who speak English as a first language and/or who are from the US, Canada, and so on, in comparison to writers from the third world. Set your rates accordingly and avoid undercharging if you are in the first world.

This also has high potential to be subcontracted out; it is easy to find writers to subcontract work to, since many people in the first world can write coherent English.

Another service that can be sold. Requires some experience with keyword research. Probably the least-sleazy of the SEO services that can be sold. Has similar benefits to content writing and other contracted work.

While most linkbuilding services are sleazy, if you're considering only the pure profit available and ability to scale, running a link building service is comparable to many other services that can be contracted and/or subcontracted out online.

B-Tier consists mainly of passive or semi-passive income sources. The main reason why most methods here are in B-Tier is that, while they can be highly profitable, these methods tend to have limitations of some sort that make it difficult to use them in and of themselves to create websites in the top one percent of the top one percent, or to otherwise make it to being one of the "best of the best" websites.

While Amazon's affiliate program can be a solid way of making money online, it does inherently take some control out of your hands, since Amazon can, for example, change their rates, their program, or ban your account at their discretion.

Other affiliate marketing has similar pros and cons to the Amazon Associates program. One large thing to keep in mind is that some affiliate programs can fall off of the face of the earth, so make sure to take this into account when making investments into, for example, content to promote an affiliate offer, as if that offer disappears or changes its rates, you can lose the money invested into that content.

Getting other people to fill out Domino's Pizza surveys for you, in exchange for a small commission from Domino's for each survey, can be a decent way to make money similar to other affilaite programs. Generally, an intangiable good such as an eBook or other download is placed in a content locker and users must complete a survey to get the intangiable good. Can require more creativity than normal affiliate marketing, but can be comparable profitable as a way to make money on the Internet.

Similar to affilaite marketing, but gives you more control over your business, to some extent. However, there is also more overhead, in terms of work required, in some cases.

Embedding advertisements from thid-party platforms can be a decent way for high-traffic websites to make money. This is in contrast to, for example, affiliate websites, which tend to have less traffic, but that traffic tends to be more targeted toward users who want to make a specific purchase (i.e., higher value traffic). Third party advertisement platforms can also be easily removed or switched out with other platforms, which provides some flexibility that certain affiliate monetization lacks.

The quality of direct advertisement deals as a method of monetization can vary based on how they are implemented. If you can, for example, implement a custom UI into your site, then you may be able to more easily and consistently handle these types of advertisements with little to no overhead.

Illegal scams are theoretically a way to make money. In addition to being illegal and scams, they do run into problems scaling due to being illegal scams. While some people may get baited into thinking that illegal or risky things are going to be uniquely profitable, that is often not even the case.

Flipping goods has potential to have much higher profit margins per sale than, for example affiliate marketing. It can also have higher overhead. While this can be a solid business, scaling it above a certain level has limitations, such as how to automate aspects of this type of business.

Craigslist can be a useful marketing tool and can be used as a component in many other methods on this list, such as flipping goods and/or promoting services like web development and content writing. However, there are limits to how much it can be scaled, since there are issues like rate limits for how many ads can be posted and so on.

If you don't mind being a guru and a hack, you can make a bunch of money LARPing as an SEO consultant. If you actually can Do a Nice SEO, then you're probably going to make more money building your own sites.

Due to currency conversion rates, you can make a very solid income doing various tasks like data entry and similar, if you're living in a country like India or Pakistan. However, if you put the effort in, there are better methods to make money online regardless of your location.

I would rather buy the best cheap handgun and put it in my mouth than be an SEO consultant. However, the pay is probably halfway decent, and if you just want a decent, middle-class paycheck, this may be a decent option for you.

If you want to work from home, but don't necessarily prioritize working for yourself, telecommuting is technically an option. It's a day job, but from your house.

Because streaming on a third-party platform or posting on YouTube inherently gives a large amount of control to those third parties, there is some risk involved. Your content can effectively be removed or demonetized at any time and for any reason. If this is not a concern to you, these platforms do have the advantage that they can generate a fair amount of views purely through "the algorithm(s)," which makes them one method that has a fairly high value on truly "making good content" and not needing to spend as much time on promotion.

Patreon and whatever "eWhoring" even means here are are a decent method of monetization, as they can be a good way of offering benefits to people for what are almost donations to a fair extent. However, like using a platform like YouTube, you are subject to Patreon's terms of service and discretion.

If you have something like a site that you made on the side (rather than building a site explicitly for profit), you might be able to pull in money by replying to the trillions of automated "sir i would like to buy a guest post" emails that everyone with a website receives. Probably around $50 per link for the average-ish site.

Plausibly mediocre side money. They also make your site feel spammier. Also, selling links is obviously considered to be "black hat SEO," which may be relevant to your business decisions.

Like the contractnig work in A-tier, but with higher fees, less ability to scale, and more control given to a third-party platform. It's fairly easy to find clients on your own; do that instead.

Potentially decent money compared to some other things that you can do; however, the amount of skill needed to get money from bug bounties is fairly high, and if you have that kind of a technical background, you will almost certainly make far more money doing basically anything else, such as web development or building a SaaS.

Various microtasks that can potentially make you $10+ dollars per hour on the side, if done efficiently; writing tasks tend to pay the best. More about making money on MTurk is discussed in this thread.

Able to potentially make $5 per hour on the side. They are generally real (i.e., not scams), but the pay is mediocre at best.

Begging for coins can potentially work if you've made a website (or similar) for fun and happen to have gathered a large audience and now are considering ways to get some money from what was previously not monetized at all. However, there are generally more effective ways of doing this, even offering small incentives such as what some will do with sites like Patreon.

[imagine a flashy advertisement for a garbage service here]

This discussion is very important.

Mod Edit: Your backlinks are bad and you should feel bad.

This is the thread mentioned in the section of the video about subcontracting:

I suppose that it depends on the job that are you going to get. I mean that if you are a manager, you should be really competent in the work with workers and the delegating of duties. If you are a CRM developer, for example, you should know a lot about the [salesforce development language](https://www.ergonized.com/blog/what-does-a-salesforce-developer-do/). And of course, you should just be yourself and answer adequately to the general typical questions.