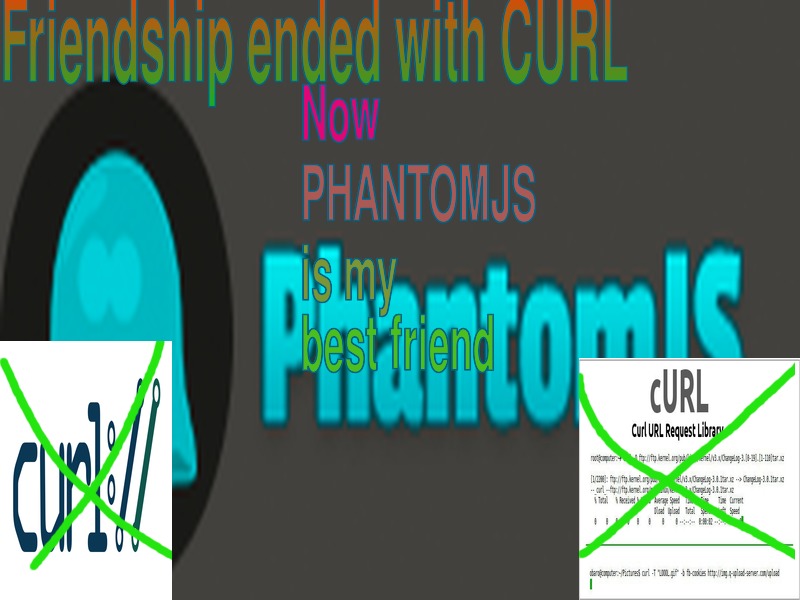 Like cURL, but for executing JavaScript, handling external resources, and interacting with webpages programmatically.

Like cURL, but for executing JavaScript, handling external resources, and interacting with webpages programmatically.

While tools like cURL are useful, allowing easy methods to fetch  raw HTML from webpages, they do not execute JavaScript. In fact, cURL only grabs the file located directly at the specified URL and will not download or load any other external files either, such as CSS sheets. For requests that can also render JavaScript and CSS, as well as generally interact with webpages, there are various other tools and libraries that can be used.

PhantomJS has been around since at least 2011 and is, basically, the first popularized headless, scriptable web browser. While it is no longer being maintained (as of 2018), it is still a solid package with good documentation.

Create a new file called reacharound.js and paste the following code into it:

Then, save and exit the file.

To run the script, execute the following code:

Which will print out the page's code after loading and executing any JS.

Running the Script as a "Reacharound"

Since PhantomJS can easily be run from the terminal, the reacharound.js script above can also be easily piped between various BASH/shell scripts. For example, this code:

Will load the same page, but save the result into a file. This could incorporated into other scripts, such as a search engine result monitoring script or local directory scraper.

Other Notes and Observations

There are various command-line flags listed in this documentation file, which can simplify some use cases without the need to write code solutions directly to a script.

The default user-agent is:

And can be changed as specified in this settings documentation file.

There is a quality article on how to--at least in theory--detect whether requests are from PhantomJS, as well as an associated presentation embedded below.

Whether there are any sites that actually use these methods is unclear.

With PhantomJS no longer being maintained, headless Chrome is one of the most common solutions in Current Year, being released initially in 2017.

Here's an extremely basic example that grabs a page's source code, runs the JS, and then saves it to an HTML file. The "getting started" guide linked under "installation and setup" suggests that this command should be "google --headless..." instead of "google-chrome --headless..." or "chromium-browser --headless..."; it may depend on your system.

Get page as a PDF

Other Notes and Observations

For more advanced scripting and automation, note that there is a Node.JS library called Puppeteer that can be used to control headless Chrome programmatically. It can also/alternatively be combined with libraries tools like Selenium webdriver.

Headless Firefox is basically the same as headless Chrome, but for Firefox. It was also released in 2017.

Also see the list of command line options for other flags that can be used.

There are no other observations about headless Firefox. It works correctly. It's CLI has fewer "out of the box" tricks for common tasks than does headless Chrome. If you're using it for more complex testing or automation, you're probably combining it with something like Selenium.

Hell yeah. It's time to use some or all of these various libraries for purposes that are relevant to your use case.

Of note is that (few, but not many!) 3rd parties can detect that there is a headless at play here:

There are countermeasures that can help with varying levels of success.

Thenkle for this. I kiss Selenium every night before I go to sleep and pray to it in my dreams. Basically what I do is:

and then I add rest of the code thanks to my sleepless VA from Sachsenhausen.

This is brilliant sir.