We don't really do these gay homosexual journey threads on here, but I figured I could be the first one either way. The purpose of this thread is to record and follow my attempt to build and grow an Amazon affilaite site using mostly Reddit.

I got the idea recently, after buying an auction domain with a couple thousand backlinks from fake news sites like BuzzFeed. This domain used to be for a Tumblr blog (which still exists) that expired. They were sharing a bunch of "facts", many of which were made up, which explains BuzzFeed's interest to share some of the content and link to it.

I was going to use it to build an affiliate site anyway, but the fact that the domain was already getting linked to a lot got me thinking - what if I could do something similar with it, but still monetize it as an affiliate site?

The domain is pretty broad niche and can cover a variety of topics. First things first, I'm going to restore some of the content that was on there and link to relevant affilate articles. I also want to wait for the site to get indexed and show up in SERPs for at least something, just to make sure there isn't some sort of an issue with the domain. Auction domains can often be a hit or miss.

Then, I'm going to start creating new content for it, which will mainly be in two categories:

I will get a writer to write short, engaging posts, and will then share those in various subreddits. Naturally, I may or may not will engage in blackhat tactics in order to have these shares get as much attention as possible. That's really the only goal with the Reddit shares: attention. While getting traffic is fine, I don't care much about random Reddit traffic, and would rather focus on targeted search engine traffic. Every shareable post will have internal links to relevant affiliate content, and the main objective is to use any links the shareable content gets to rank the site for various affiliate keywords.

While I will start off with Reddit, if I see the site getting shared on other platforms as well, I might start posting there also.

The goal is to get the site to at least $1000 per month and then flip it. Unless for some reason I end up enjoying doing this, which I probably won't.

What I've done so far

Got the domain and a nice logo.

Very nice. That reminds me that we should add a "Journeys" and potentially "Introductions" category/subcategory.

Good luck on your journey, don't forget to ping my sk__ype

sorry for my english limited.

So I put three articles up on the site and left them there for a week.

Decided to see what's going on with them, and the site still wasn't indexed. Fishy, right?

Then I thought might as well connect it to the Search Console and take submit the sitemap since for some reason Google isn't picking up.

I then went to bother my hosting guy to put a TXT record in (didn't have the option) so that I can verify ownership of the site with the Search Console. Apparently a TXT record is the only way to do that nowadays.

That worked, but when I went to the dashboard I literally shat myself. Apparently there was manual action on the domain: 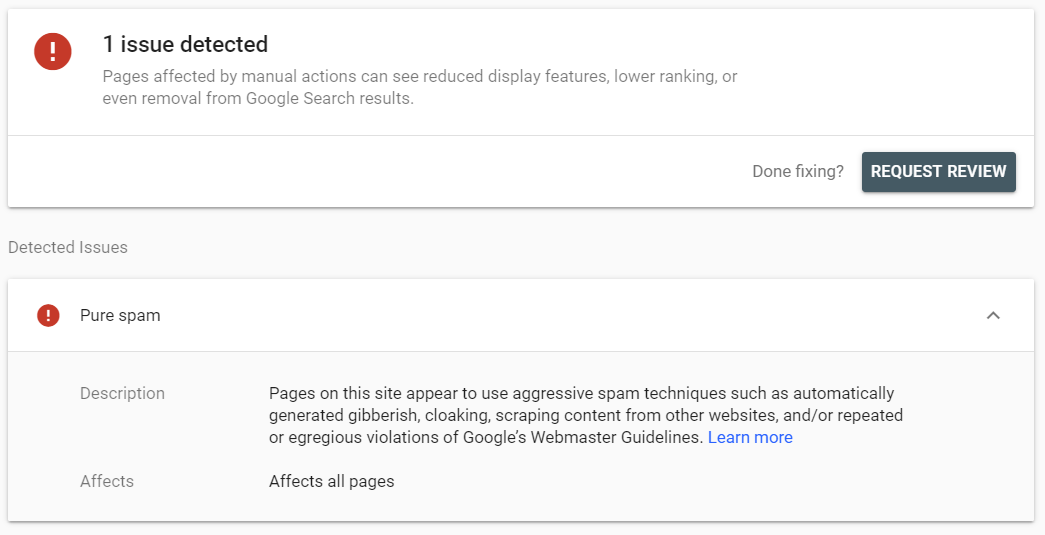 I requested a review just for the lulz, but considering using an auction domain was supposed to be a head start, might as well go with a brand new one instead.

For the record, I've bought about a dozen auction domains at this point and none of them have ever had anything like this. Nothing in terms of anchor text or anthing on the Web Archive pointed to this though, although come to think about it, Ahrefs did show some links built to a single page related to drones (which are irrlevant to the niche), but I didn't think much of it. Probably should have.

Either way, fuck Buzzfeed. Not a big deal and will either try to find a better auction domain and pay more attention this time, or just go with a fresh domain for this project instead.

How is your Journey going dear?