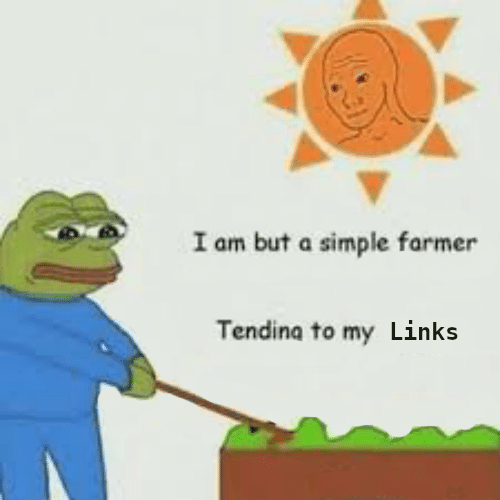 What is a link farm?

A link farm refers to a website that serves no real purpose except to link to other sites. While the exact usage can vary based on who you ask, the term is most commonly used to refer to sites that post news or article-type content, set up to look like fairly generic blogs or news websites. The content quality is generally low and the sites generally have extremely few or literally zero human readers. Often, many of such websites will be run by a single person who profits off of them by selling D-tier "guest posts" (more accurately referred to as PBN links) for anywhere from $5 to $500 per link (generally somewhere in the $10 to $50 range).

While links on "link farms" are often able to improve a site's authority, they are generally on the lower end of the quality scale and are generally considered to be either black or sort-of-greyish hat.

Exact-Match or Partial-Match Domains (Rather than Brands)

As discussed previously, exact match domains are one of the worst possible decisions that you can make when setting up a website, except possibly if you're doing some troll shit with Bing. If a site is called something along the lines of businesswebsite.com, seoarticles.net, newszone.com, viralbloggers.com, or so on, there's a good chance it's a (garbage-tier) link farm. Often times these sites aren't even built on expired domains (scroll down for more on those), which is some amateur bullshit for a link farm.

Most websites are relatively small. If you've literally never heard of a website, yet they're pushing out an average of three, four, or even 5+ articles per day (particularly if they're relatively generic), there's a good chance that they're a link farm.

Most websites have at least some semblance of a theme, even if only generally about "politics," "health," or "whatever." Link farms often accept articles on virtually every topic imaginable. If a site's homepage has the article "Top 10 Reasons You are Breaking out in Acne During Pregnancy" directly next to "Top VPS Hosting Plan Reviews," there's a good chance that the site is a link farm.

When real/"real" sites cover content on an extremely wide breadth of topics, they will generally at least make a reasonable effort to segment the site into different categories.

Or to be more specific, sites that look extremely generic, where the webmaster couldn't possibly have spent more than a few hours throwing the site together. While there are minimalistic sites that are actually real, such as SEO by the Sea, a generic site is an easy flag to use at first glance.

In addition to the obvious implications, if a site claims that it is run by John Johnson from Chicago, IL, but the site's content contains common speech patterns or words associated with writers from India, this can suggest that the site is being run under a thin alias as part of a link farm.

Articles with a Single Link

The most primitive implementation of the PageRank algorithm splits the authority passed from backlinks evenly between all links on a page. While this algorithm has been refined substantially since its inception, it is still very common for low-effort sites to publish articles that contain a single link to a target page in the attempt to gain more authority to the target page.

Of course, some SEO consultants go a step further and try to "conceal" their link building efforts in the most transparent method possible. Specifically, by adding (often exactly two) other links into the article to the most generic "authority" sources possible.

Have you heard of a Dentist? It's time to learn five tricks about how to steal from your dentist.

No real article starts by clarifying what a dentist is.

The term "anchor text" refers to content wrapped within the <a> tag of a link. For example, in the code snippet below, the anchor would be "click here."

Historically, anchor text has historically has been a massive factor used by search engines to infer the meaning of pages. While the effect has been greatly diminished since the Bush administration, it continues to have a substantially-milder but non-trivial impact on search engines. If you would like to learn more about anchor text, you can also read this article by my home boy Joshua Hardwick, who I have literally never talked to before, but whatever.

In particular, while there might be real reasons to use this type of anchor text, when combined with terrible content, and especially when the anchor text flows unnaturally with the rest of the content, this can be a clear sign of a link farm.

The example above shows an instance of spammy anchor text.

Many sites that are open to content contributions will include a page listing any general guidelines (which you can find relatively easily with this video guide). A site that is fishing for as many guest post submissions as possible (often only mentioning that there is a charge by email) might have vague guidelines like the following:

For any guest posting submissions, please read our requirements:

When sites that are looking for "real"/real guest contributions list guidelines, they'll generally be more specific and/or restrictive.

Identifying Link Farms as Part of a Larger Network

Analysis of websites will generally, or at least often, be done as part of a large batch of URLs. In these types of scenarios, there are a number of techniques that can be used to identify which sites in a list may be part of the same network or run by the same individual, which can frequently be used to identify low-quality link farms.

In addition to the use of archive.org (discussed below), expired domains can often be recognized at a glance by looking at a site's domain name and general branding. Examples of common types of expired domains include:

These type of domain names are particularly telling when they feel off related to the site's current content, particularly if the current site looks like a fairly generic WordPress installation.

By using archive.org, it is possible to examine a site's history over time. As discussed in a previous article, archive.org takes snapshots of sites at various points in time. If a site's older snapshots show an entirely different site, this is generally an indication that a new registrar picked up an expired domain. Another indication of expired domain use is for a site's frequency of snapshots to die down for a few months or years before resuming. Even if the site looks very similar or even identical to the older snapshots, this can be a sign of an expired domain; when PBNs are built on expired domains, the new site owner will often use content from archive.org to rebuild the site easily (which is technically copyright infringement, at least in general).

Multiple Sites on the Same IP Address (Or Subnet)

When evaluating stes of potential guest post sites, bulk checking the sites' IP addresses is a useful way to identify whether some sites are under the same ownership. Even when on slightly different IP addresses, sites on the same subnet (such as 69.145.45.200 and 69.145.45.211) have a good chance of being connected or owned by the same operator.

Identifying Other Hosting Similarities Between Sites

Similarly to sites being on the same IP address, other footprints that can be used to identify a network include similarities in domain registrar, server location, WHOIS information (including potentially use of domain privacy), and so on.

Finally, you can run the site through a backlink checker or similar. The general process to analysing sites is discussed in more depth in this video guide on competitor analysis.

Being able to identify whether (and the extent to which) a sites are link farms is useful for evaluating websites. You should probably do that where applicable.

Also, if you're ever bored and looking for new niches to compete in crawling these shitty sites and pulling the anchor text is a great source of ideas.