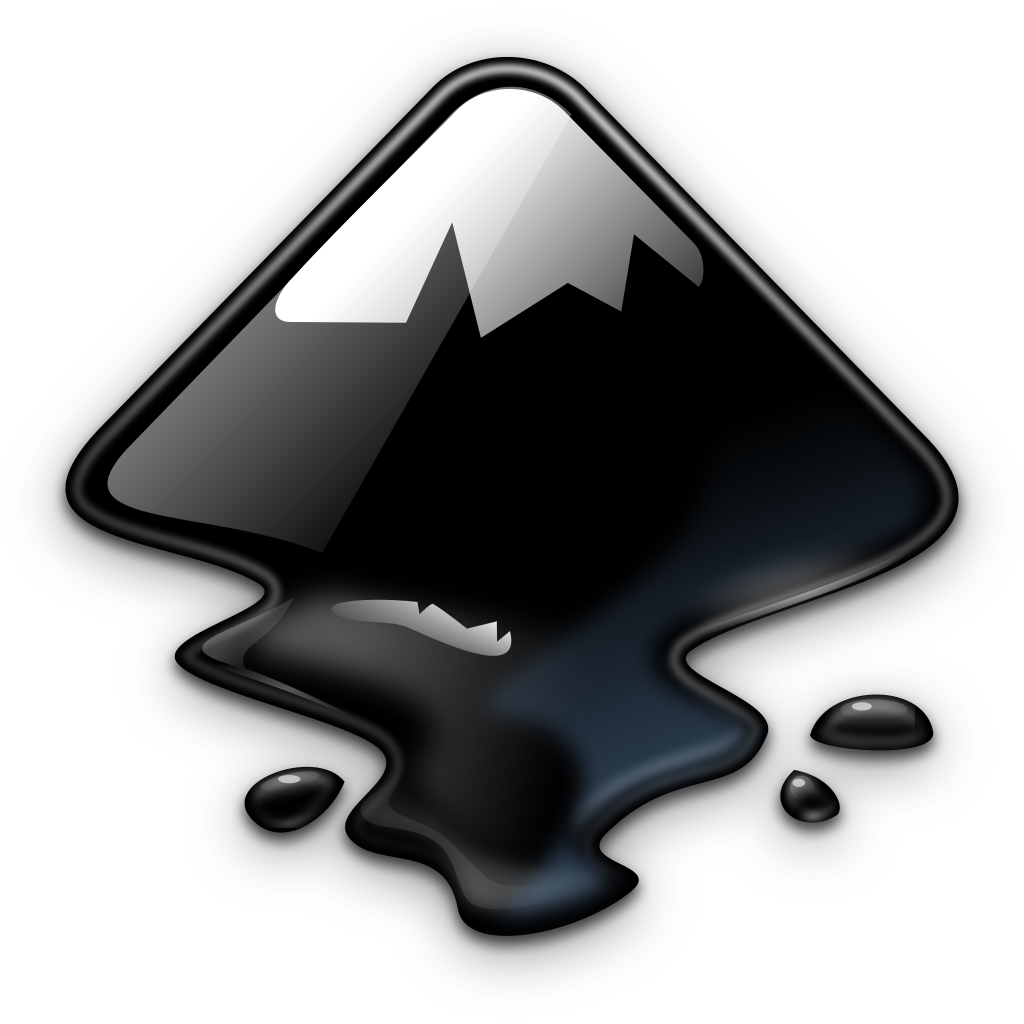 Inkscape is a pretty neat program for editing vector graphics, sort of like an open source version of Adobe Illustrator. If you want to learn a little...

Inkscape is a pretty neat program for editing vector graphics, sort of like an open source version of Adobe Illustrator. If you want to learn a little more about Inkscape in general, check out this article.

Let’s say you’re in the mood to make some low-effort memes. Here’s a step by step guide on how to do just that.

Well, first you need to complete step 0 (download and open Inkscape) but I’ll assume that you’ve done that already.

Next, find the image(s) that you want to edit for your project, by either downloading them from the Internet or taking them yourself. Pretty much any standard type of image file can be imported into Inkscape.

When you’re ready, go to the top left corner of the screen and press File → Import

[Protip: You can enlarge the images in this article bu clicking on them] 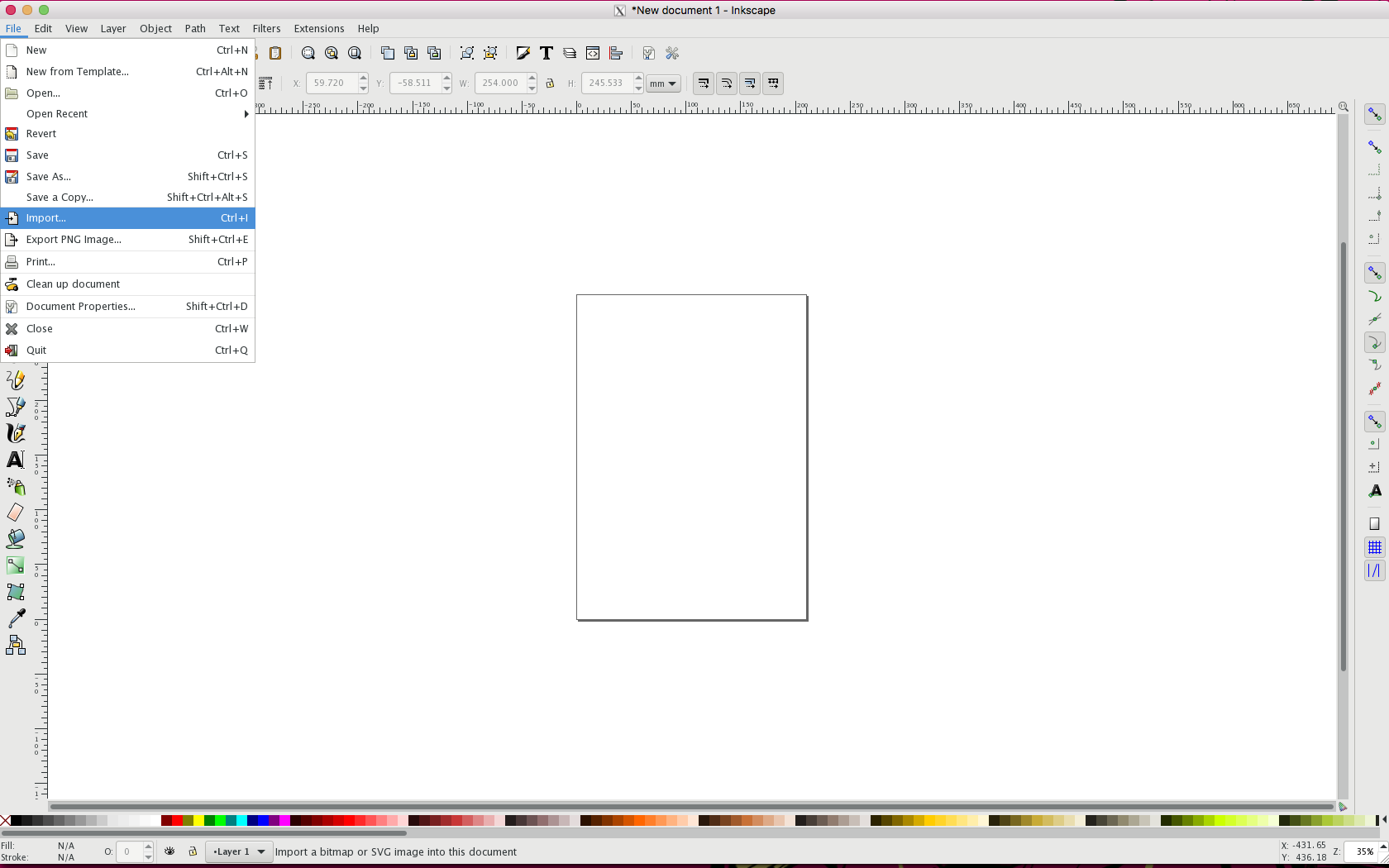 The following box will appear. I usually choose Smooth (optimizeQuality), because we’re all about quality here. 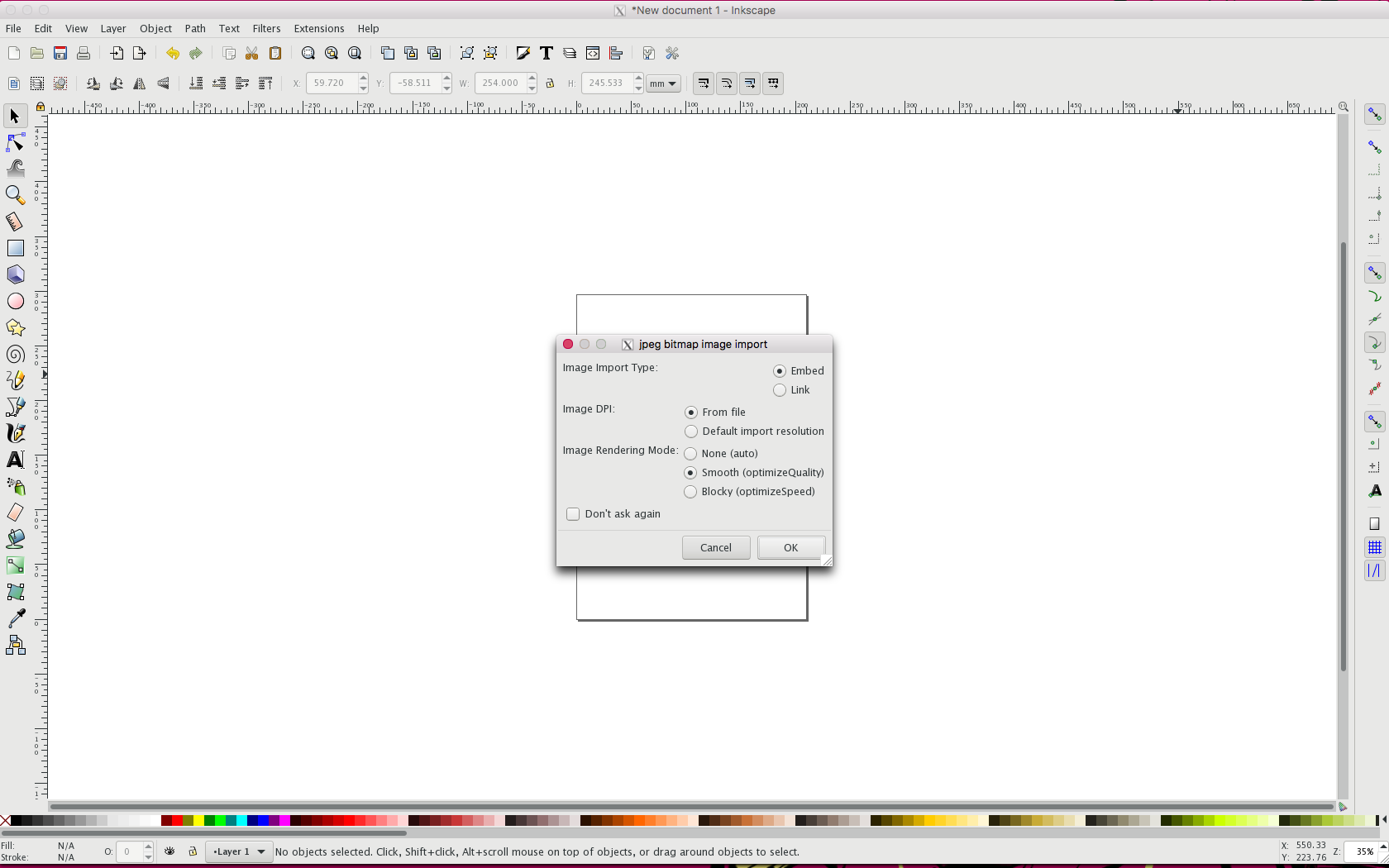 Once you press OK, the imported image will appear on the canvas next to the blank document area. In this case, I’ve stolen a meme and am going to excise part of it for my own use. 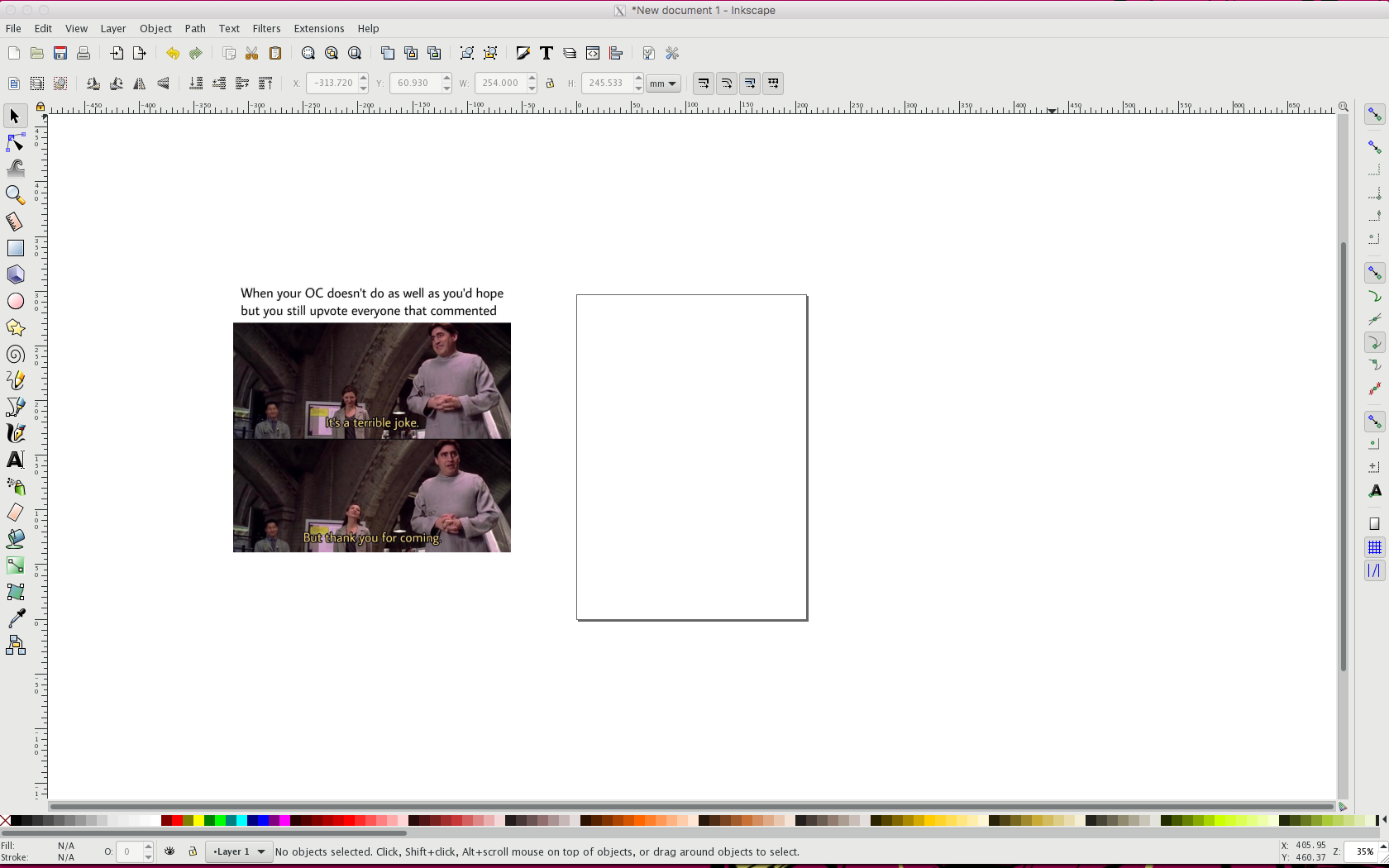 Once your image is imported to the canvas, it’s time to change some default Inkscape settings.

First select the image using the Selector Tool (the black arrow at the top left). When the image is selected, you’ll see that input boxes at the top of the screen display it’s x and y coordinates, as well as its width and height and presently set units.

By default, Inkscape sets units as millimeters (mm), which doesn’t make sense to me (unless project is for print media). I always change the image units to pixels (px). 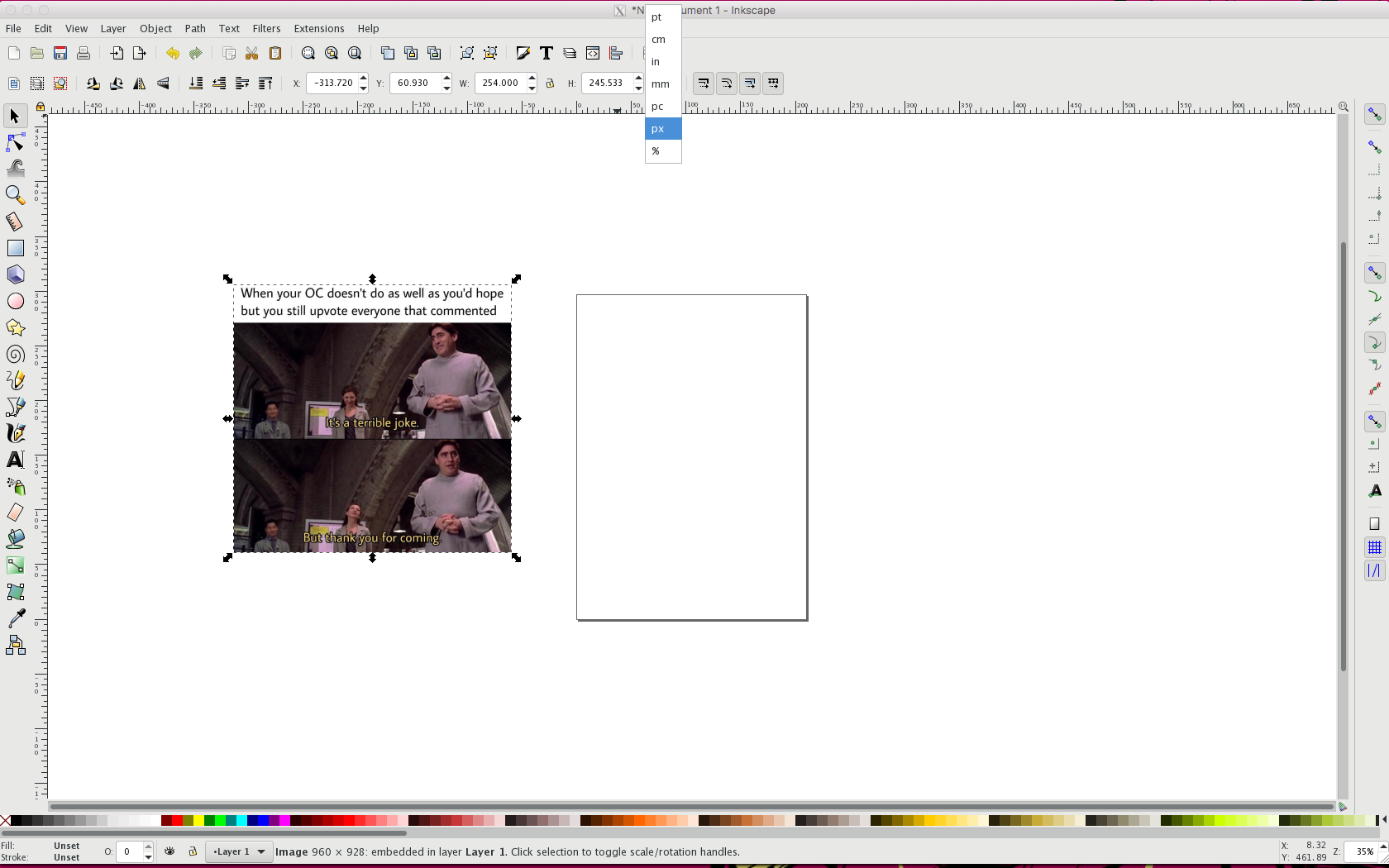 Next, select File → Document Properties (or press Shift + Ctrl + D if you like keyboard shortcuts).

Here, you can also change the General - Display Units and Custom Size - Units to px so that everything is consistent and groovy. 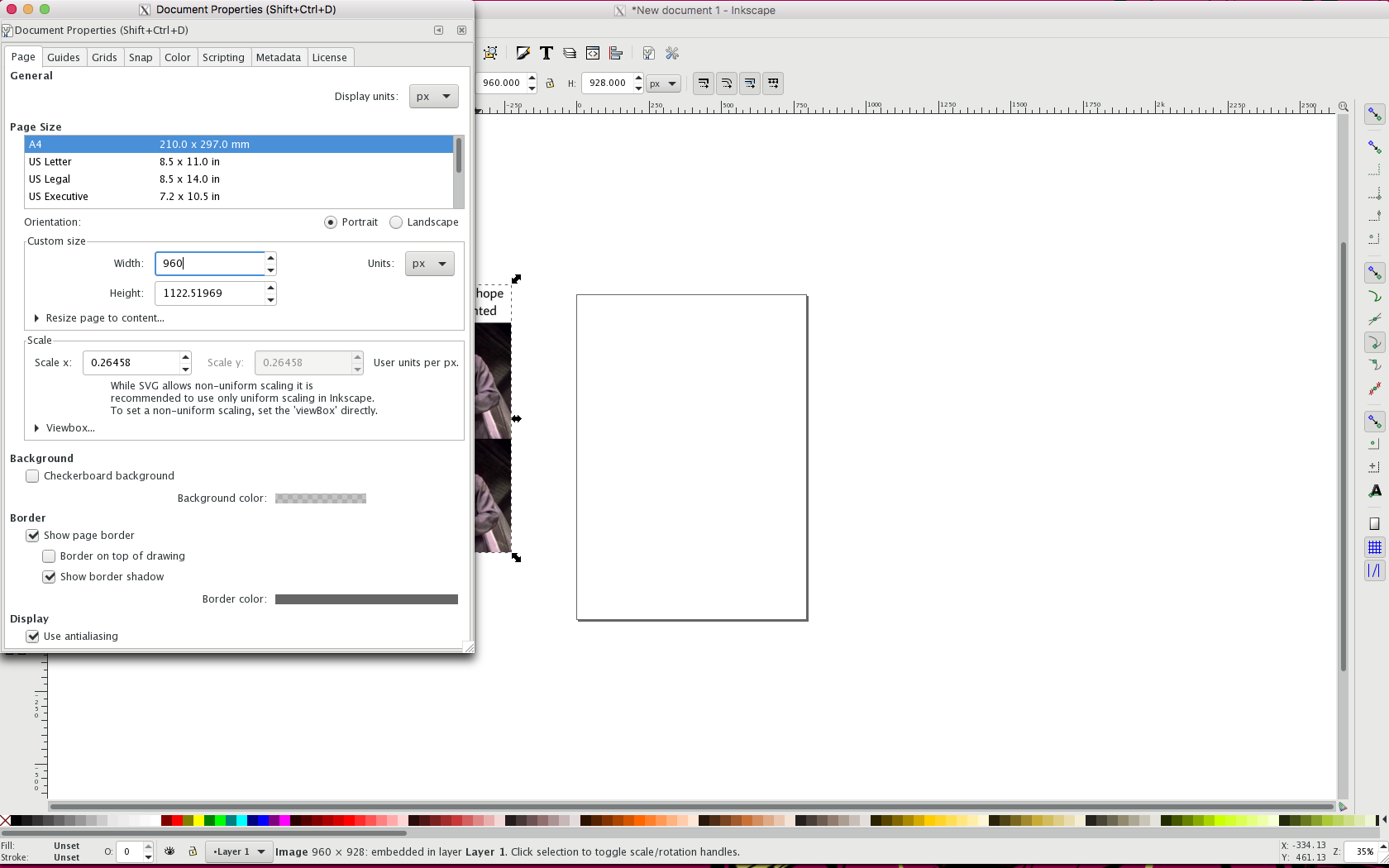 You can also adjust the document dimensions from this menu by changing the values in the Width: and Height: text areas. When you eventually save and export your finalized image, only items within the document area will be included in the export.

In the screenshot above, I changed the width of the document to be the same length as the imported image (because the image is still selected you can see that both widths are 960 px). We don’t know what the final height will be yet, so we’ll return to fix that later.

Cropping is honestly very weird. Whereas most image editing applications have a tool especially for cropping, Inkscape does not. As far as I know, this is the easiest way to crop an image in Inkscape.

First, select the Rectangles tool (the blue square on the toolbar, or press F4) and create a rectangle over the part of the image that you want to keep. Only parts that you want cropped out should be showing. Then, choose the selector tool (shortcut: F1) and select the rectangle that you just made. 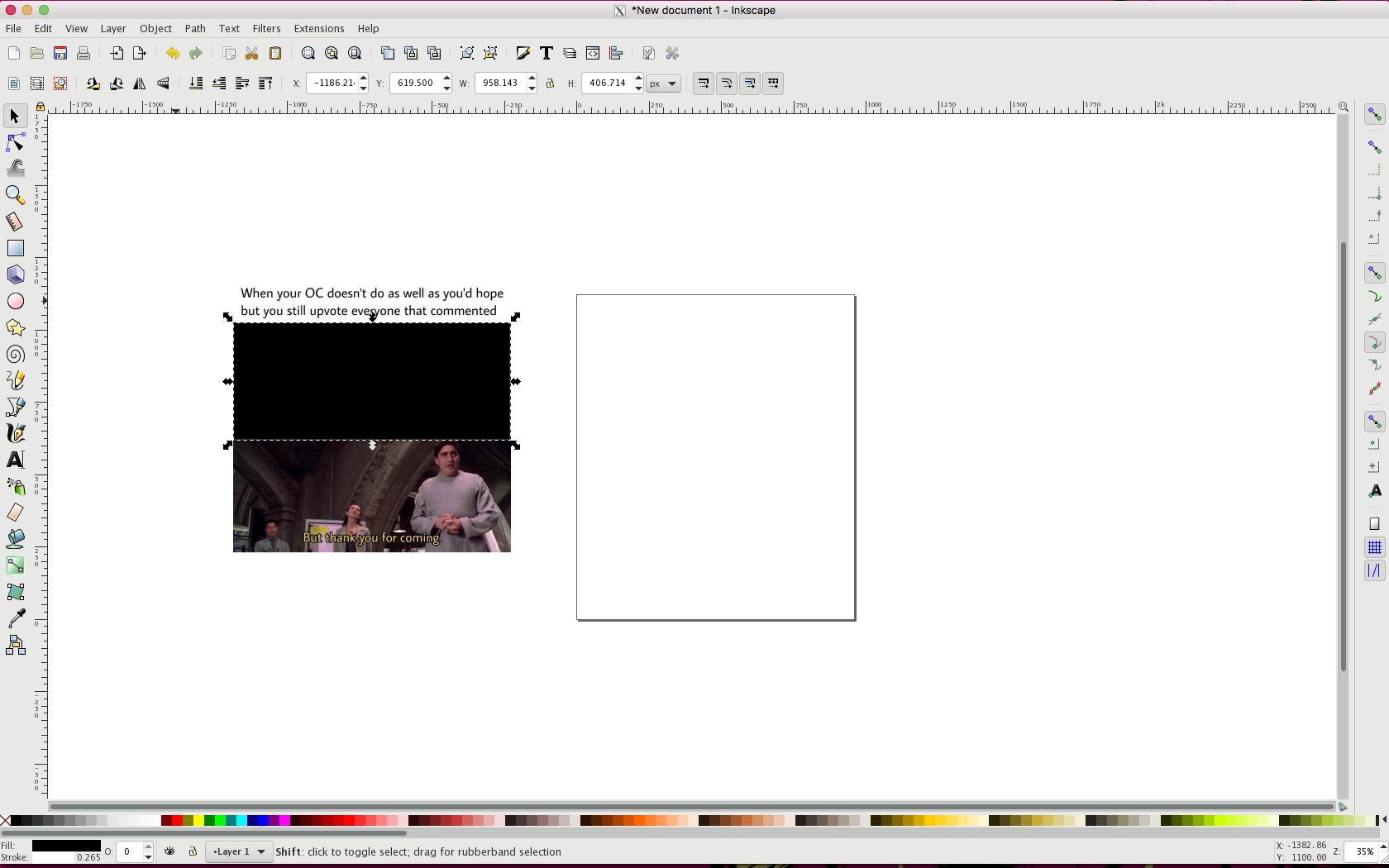 While holding down the Shift key, select the larger image as well so that both it and the black rectangle are selected. 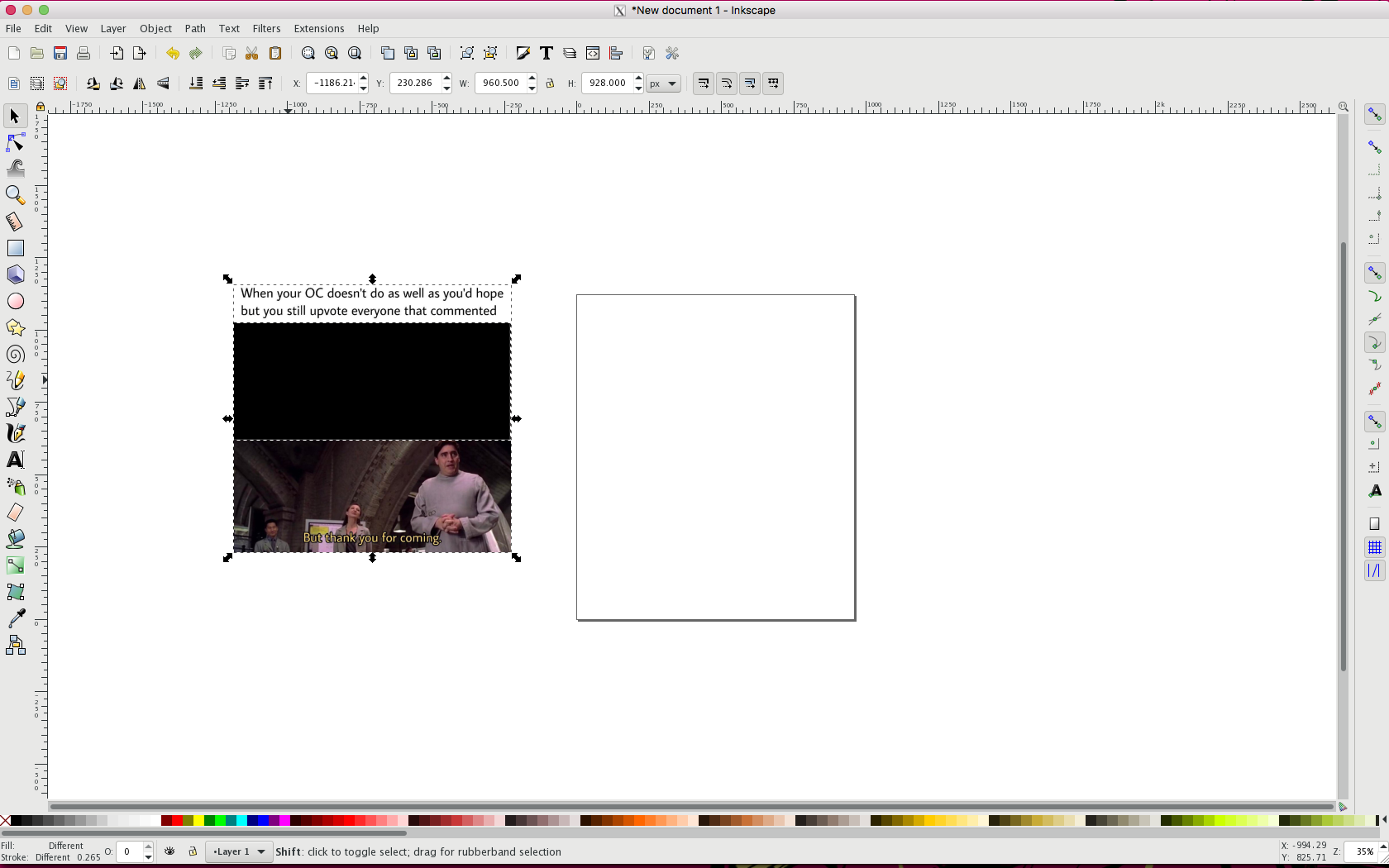 While both objects are selected, select Object → Clip → Set from the top menu. 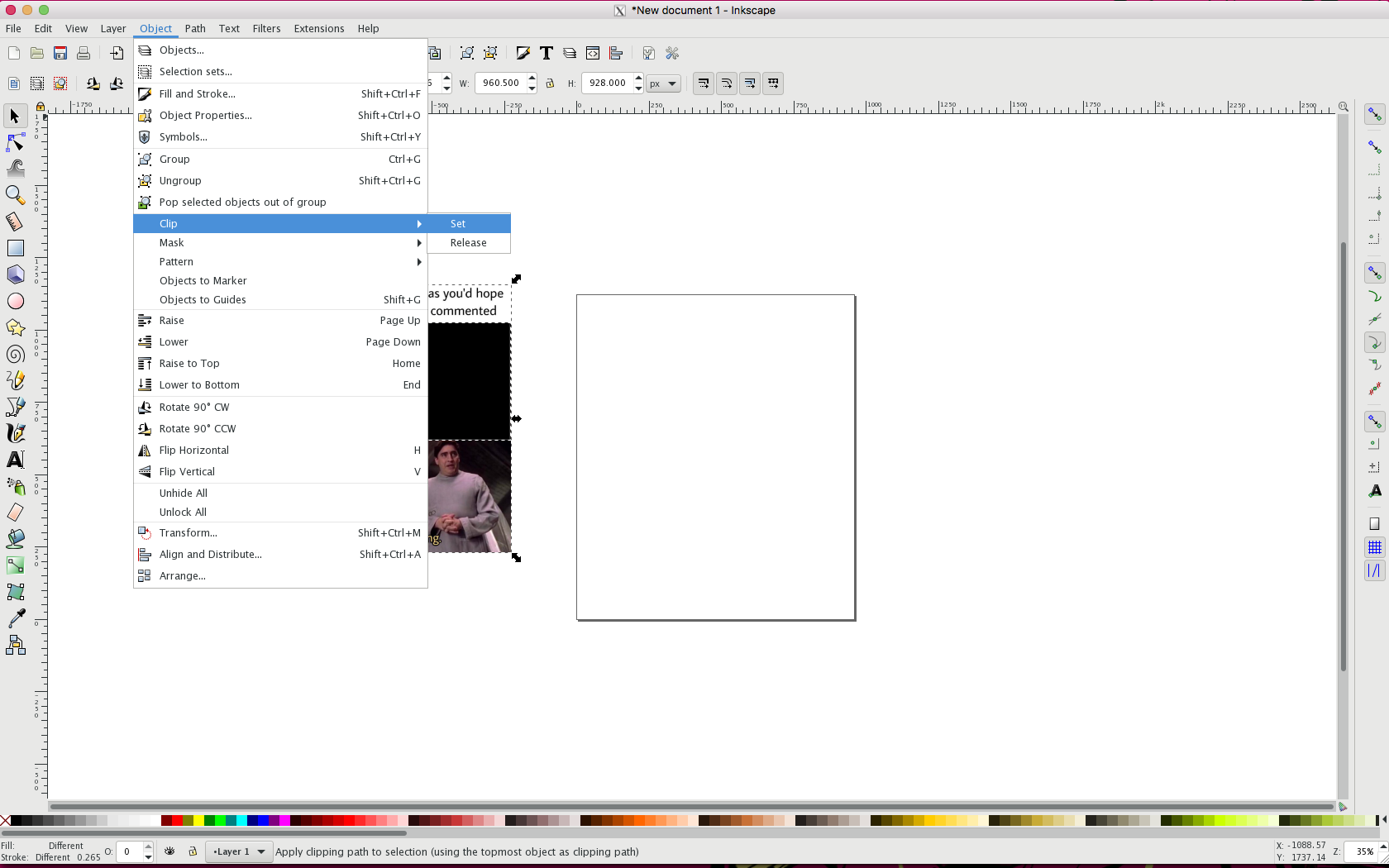 Once you’ve hit “Set” only the desired part of the image will remain. 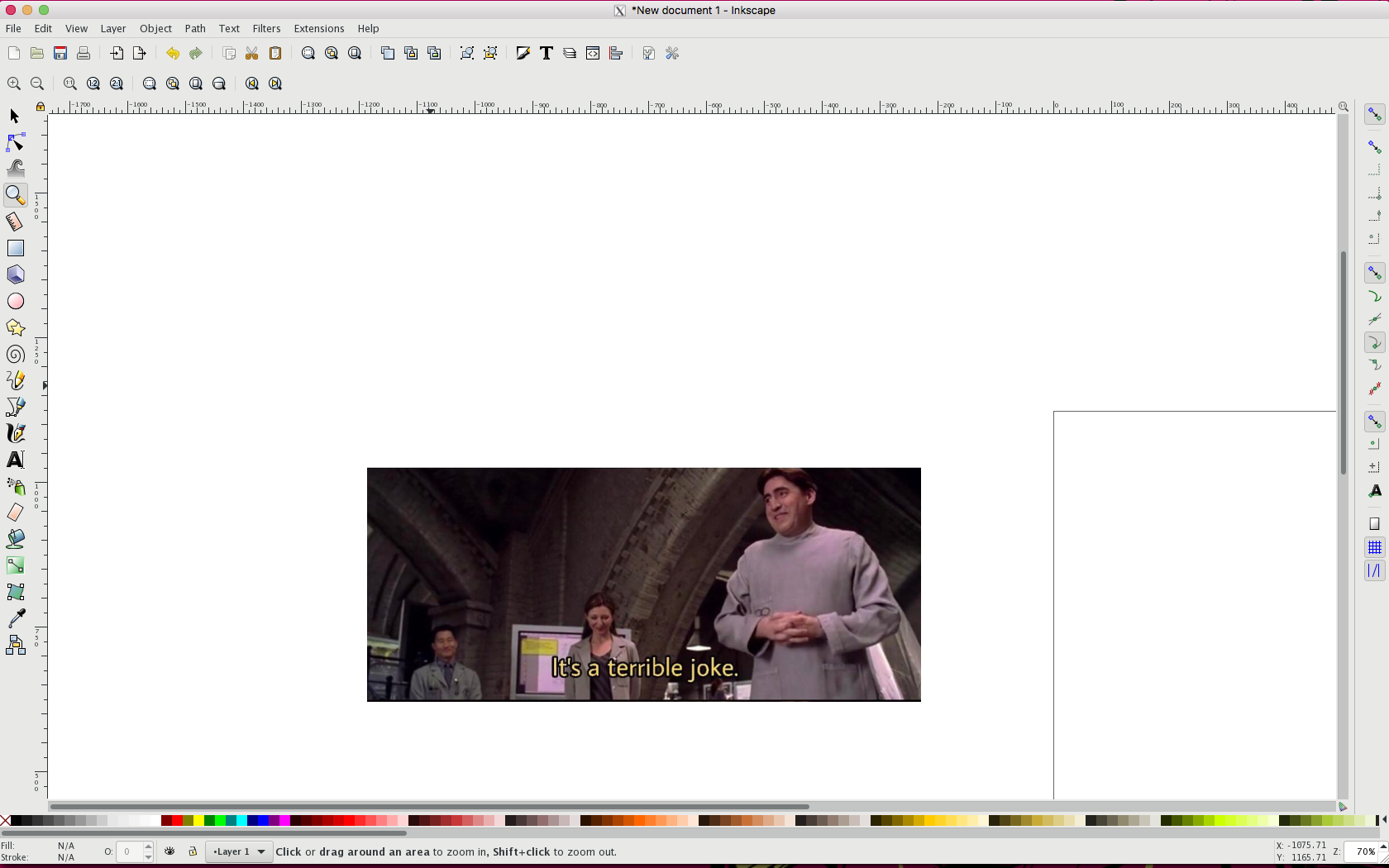 As you’re working in Inkscape, generally some imported elements (such as images) and created objects (such as text) will appear very tiny and be difficult to see and work with.

You can zoom into these elements using the Magnifier tool (F3). Once the magnifier tool is selected, more options will appear on the top toolbar. It will be set to zoom in by default, but you can also use it to zoom out, zoom to a specific aspect ratio, or zoom to match the page width (along with other options).

By holding down the key of your mouse, you can also draw a rectangle with the zoom tool, which will automatically zoom in on the selected area.

Every good meme needs a caption, which means we’ll have to add some text.

Select the Text Object Tool (F8, or the big A on the toolbar). Then, click anywhere on the canvas to place a text cursor and type whatever you want the text to say. The text object that you create can be moved anywhere you want later. 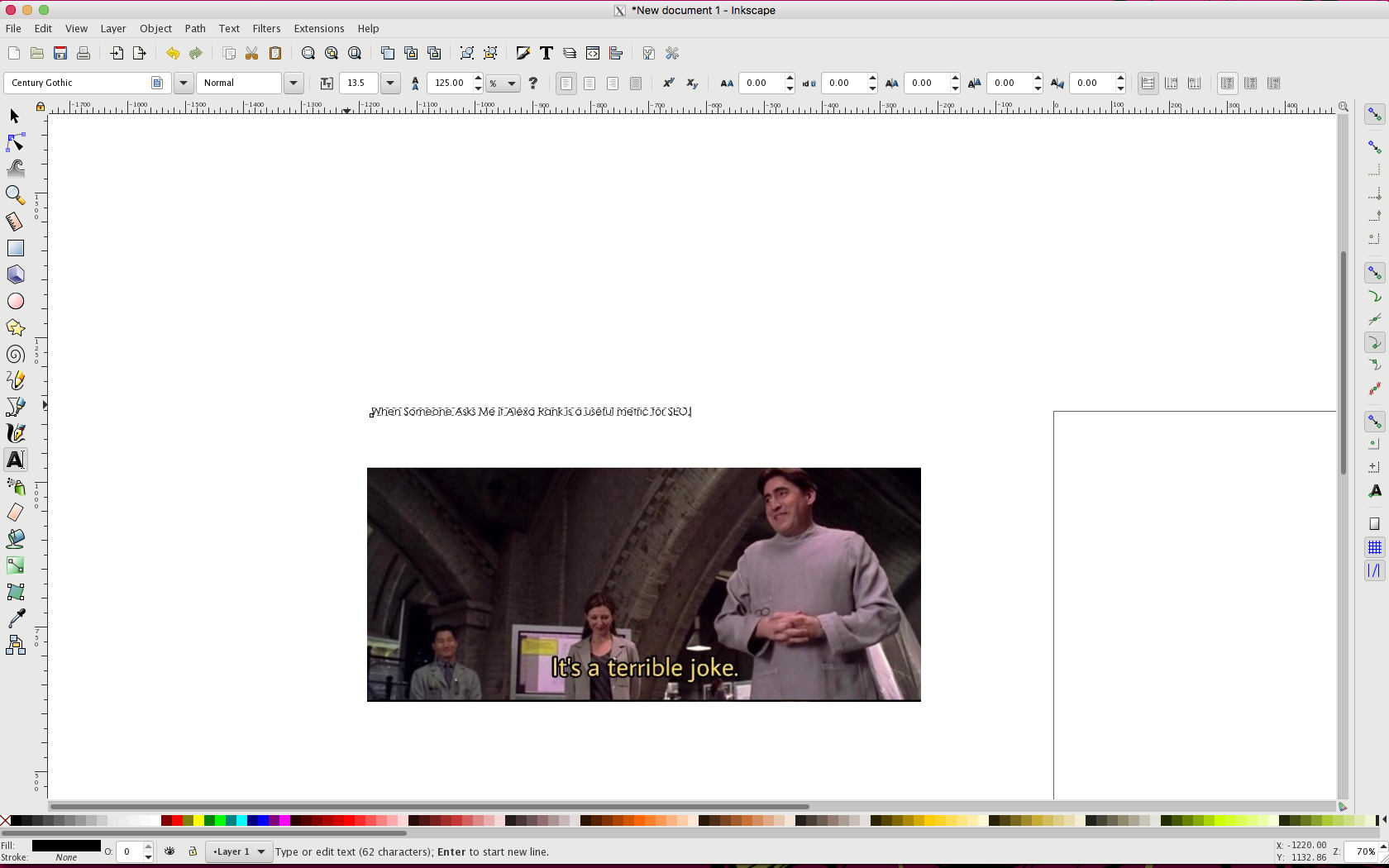 As long as the text object tool is selected, you can manipulate aspects of the text such as Font and Font Size. 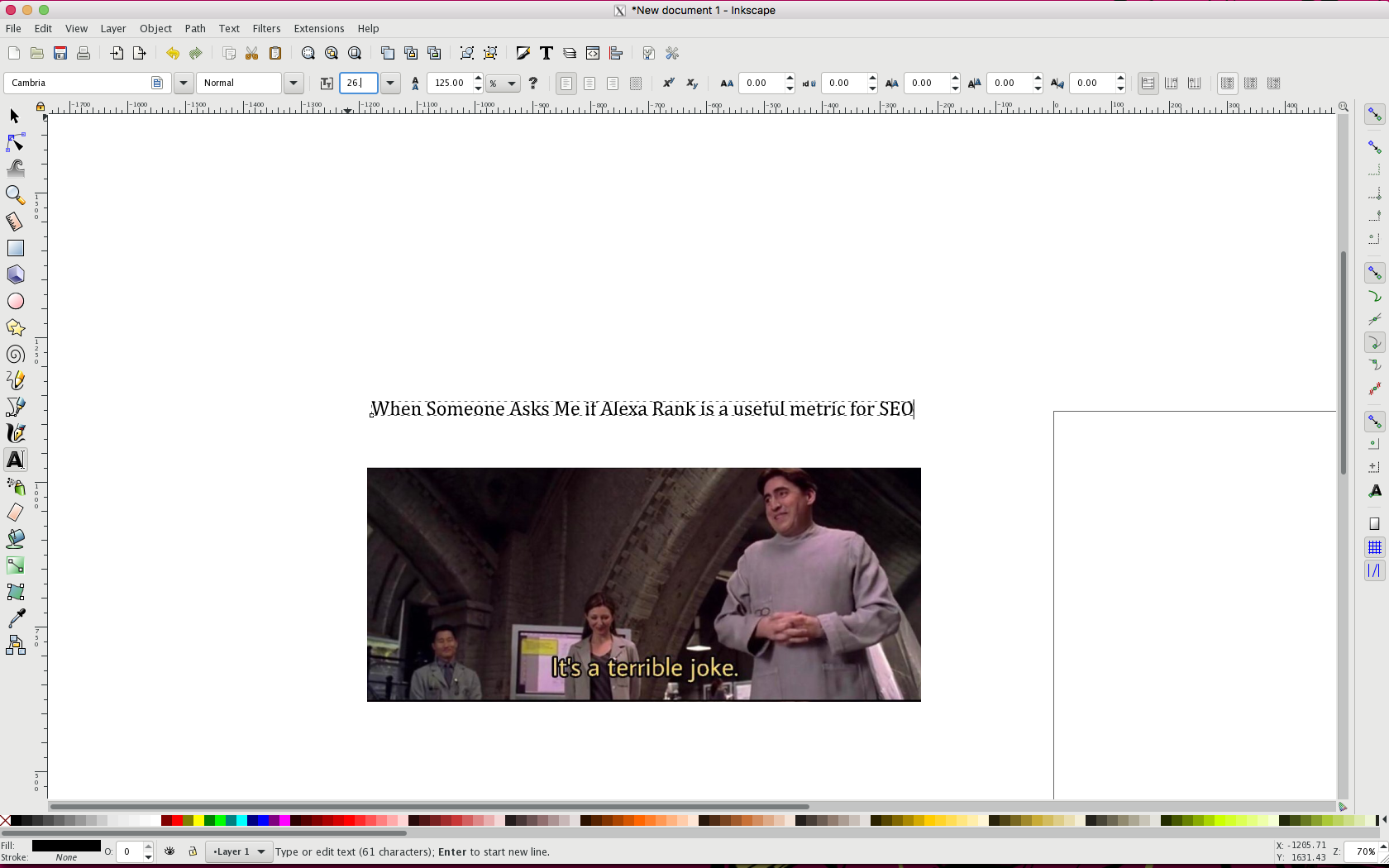 First, we will return to Document Properties (Shift + Control + D) and make sure the document Width and Height are correct. The height will be adjusted to 450px to accommodate both the image and caption. 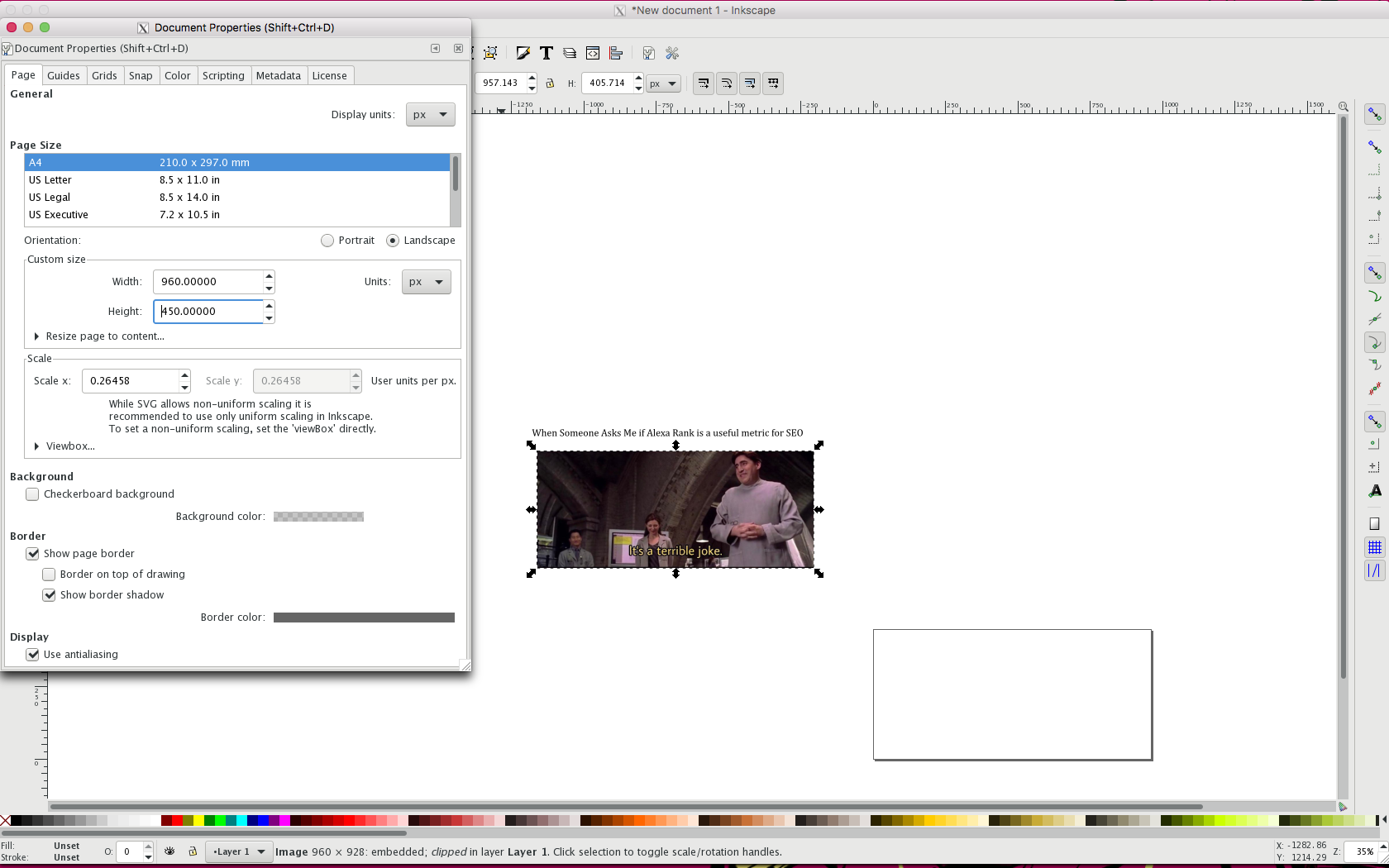 The width will also be decreased slightly to 957.143px because I accidentally cropped a few pixels off the side of the image (protip: I could have set the dimensions of the black rectangle to be a precise number of pixels in order to avoid this!)

When you’re done adjusting the document area, you can use the Selector tool (F1) to drag both the image and caption into the proper locations. The text is its own object, which means it can be moved around easily. 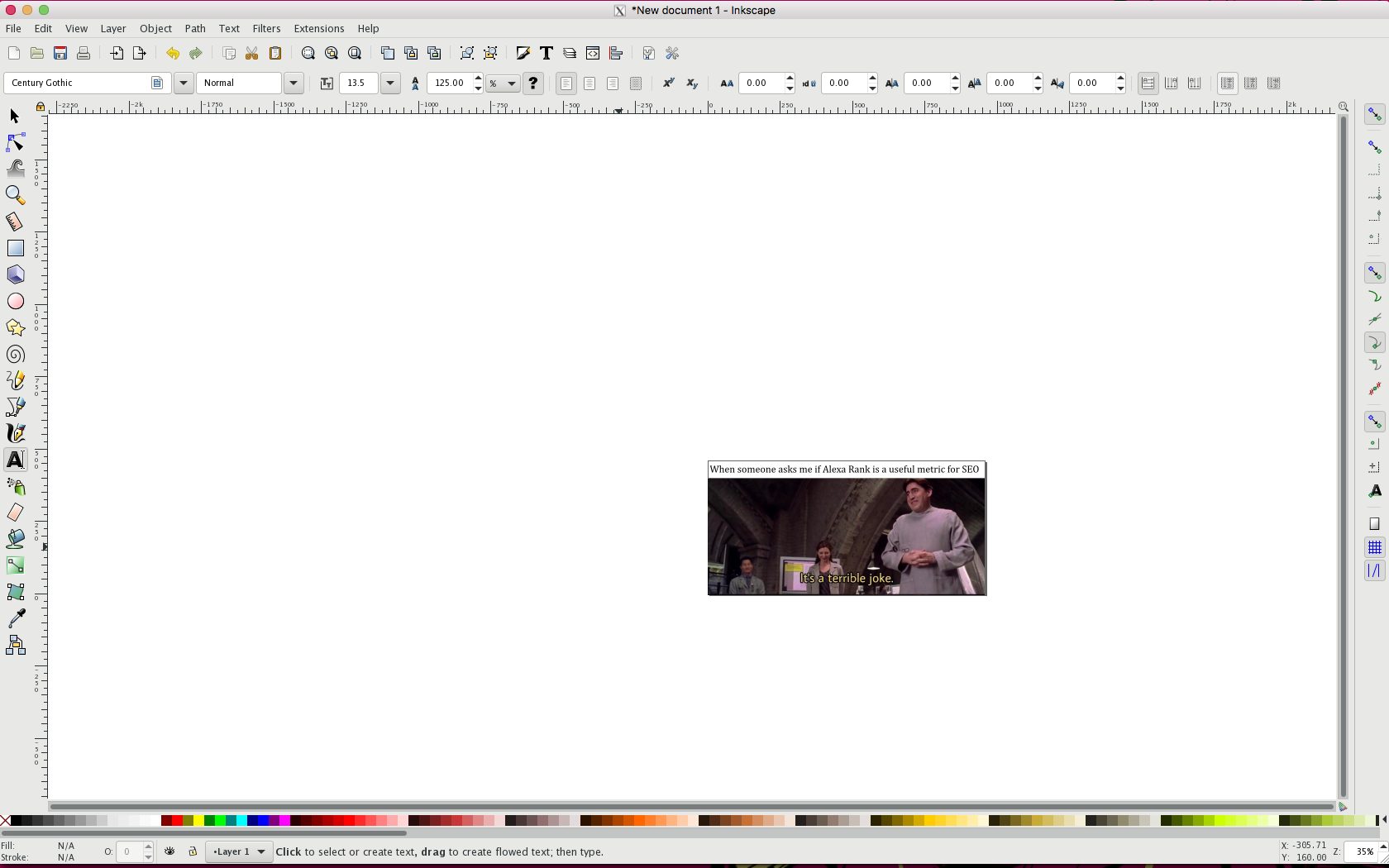 Finally, you get to export your new image as a PNG. Go to File → Export PNG Image… or press Shift + Ctrl + E to open up the Export area menu on the right side of the screen. 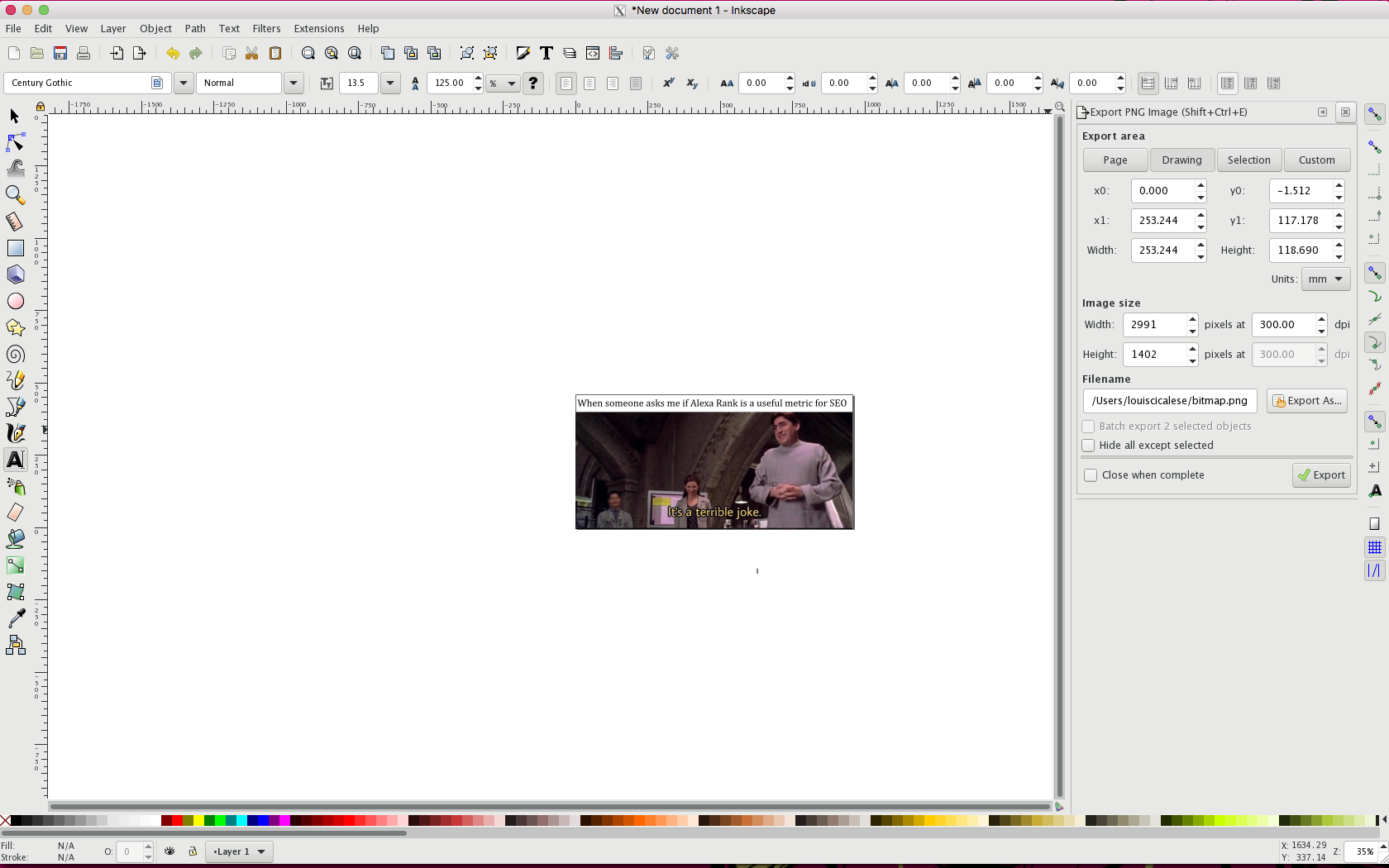 You’ll notice that once again, the Export area units are in mm, so you can change that to pixels. The reason this matters is that the Image size area is listed in pixels automatically (even though everything else is in mm by default).

The Image size also defaults to be very very large (in this case, 2991 x 1402px). If you export the image as it is, it will be weirdly huge.

Instead of doing that, open up Document Properties one more time and set the Image size to be the same as the custom document size (for this document, about 957 x 460px, about a third of the default image size Inkscape tried to set). 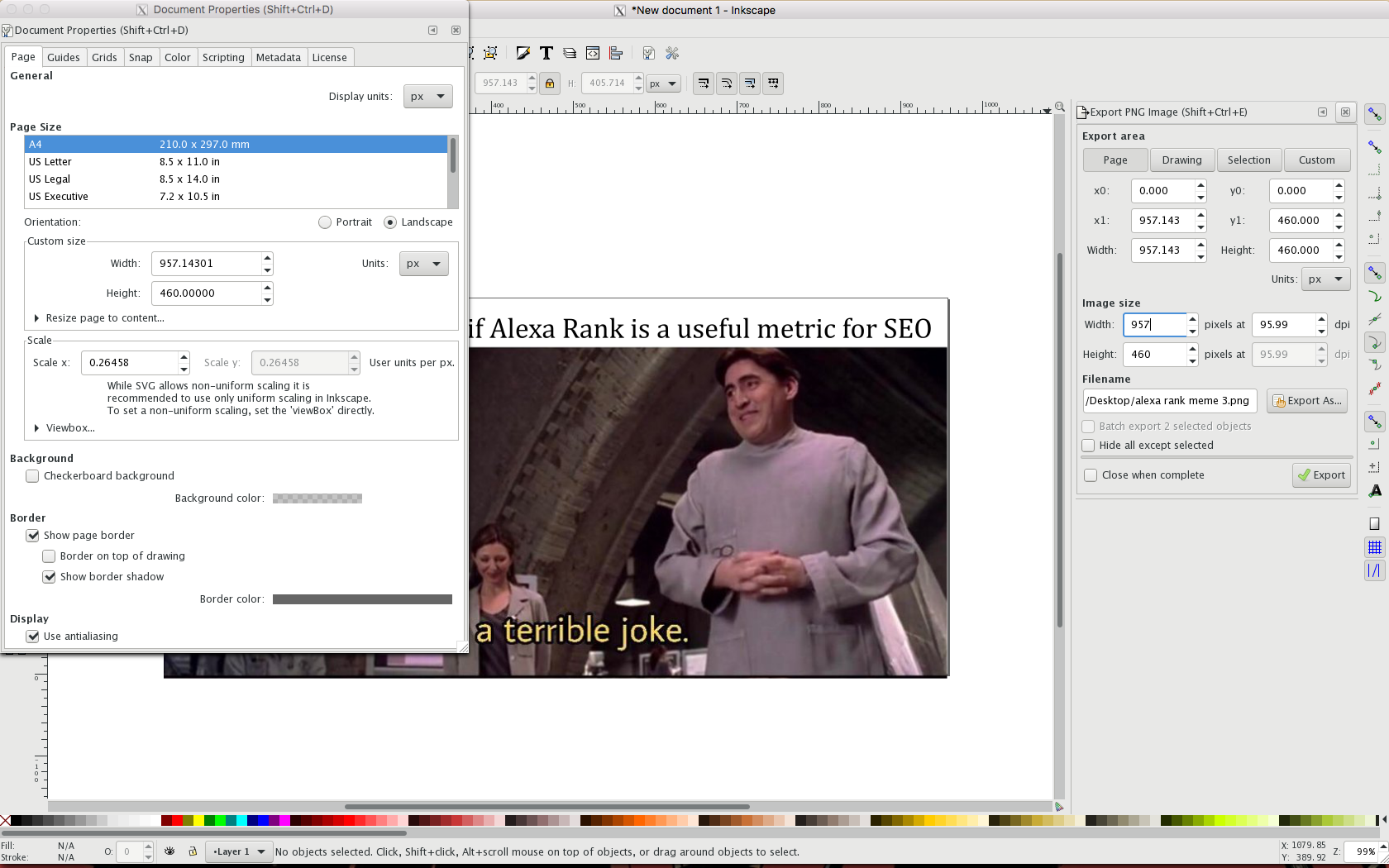 Now that these values are synched up, you can also mess with the dpi if you want. 300dpi is considered print quality and probably isn’t necessary if you’re just posting your image on the Internet. If you’re worried about file size, selecting a lower dpi may be a good idea.

Once that’s squared away, cllick on Export As… in order to choose the name and destination of the soon-to-be exported file. Once you’ve done this, select the Export button with the green check mark. 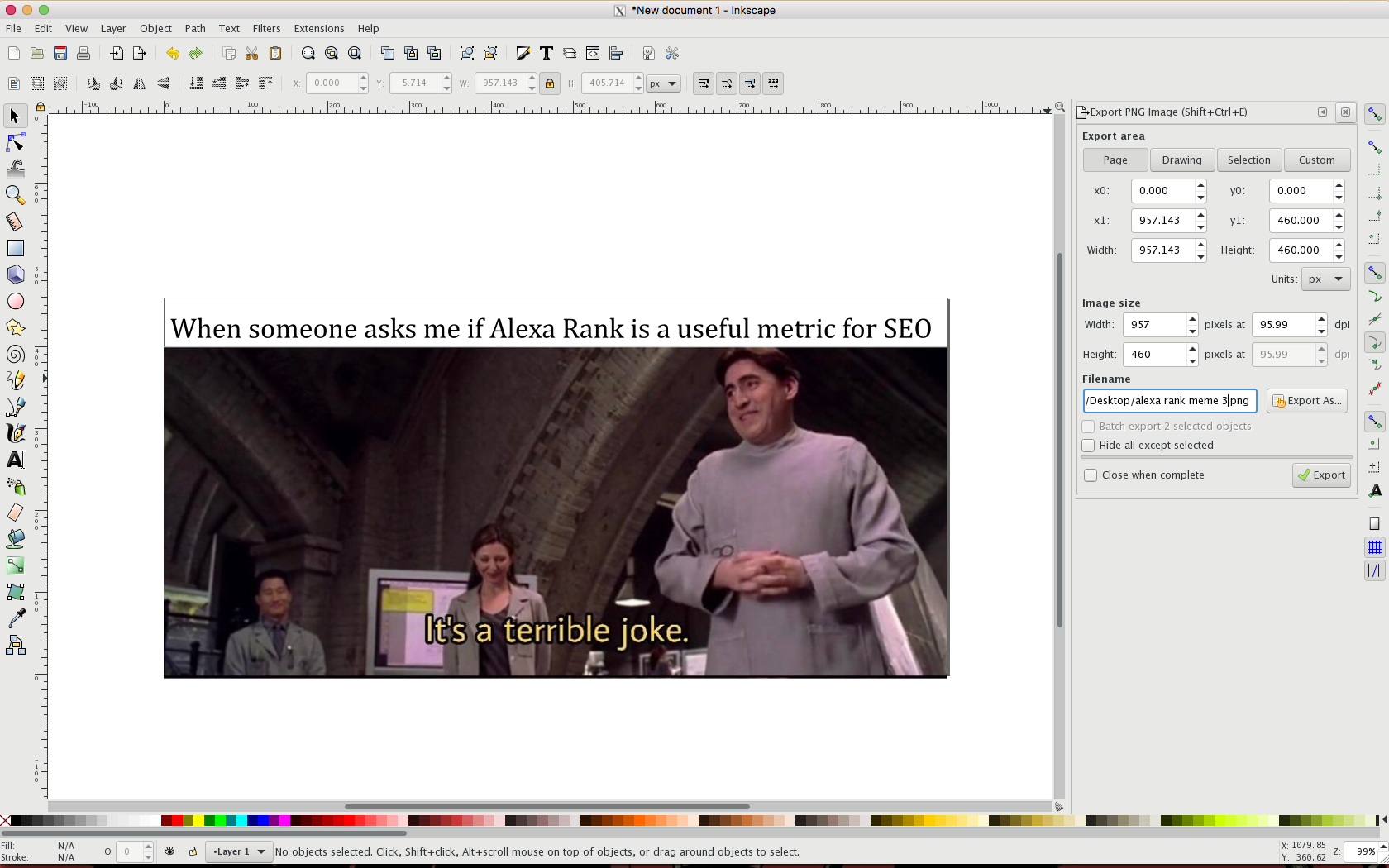 Now your image should be exported as a PNG file. As far as I know, Inkscape only exports documents are PNGs, though it can save images as .svg files or a variety of other relatively obscure formats. If you want your image to be another file format you’ll need to use another app to export it.

Now that you know how to manipulate downloaded files in Inkscape, you can cobble together memes, posters, and anything else. Inkscape also has a number of drawing tools that you can mess around with for your own purposes. Making dumb memes only scrapes the surface of Inkscape’s vast potential.